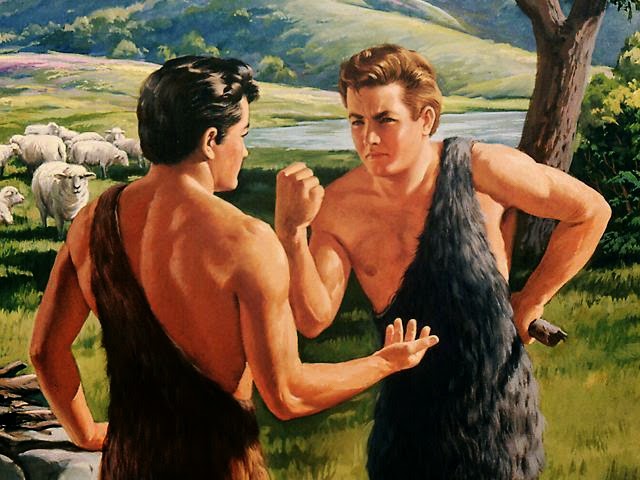 The story of Cain and Abel in Genesis 4 is a story of Grace vs. Law, God’s gift of righteousness vs self righteousness, unmerited favor vs. merit, no condemnation vs. guilt and condemnation. Abel’s offering represents the righteousness of God but Cain’s offering represents self righteousness.
Contrary to what most of us were taught growing up in our Sunday schools. Cain’s offering was not rejected because he offered unripe or spoilt fruits to God. From his name Cain which means “Acquired” for Eve said I have gotten a man from the Lord. They were under the impression that this was the seed of the woman.
So he was raised up with special treatment and preferred above Abel which such simply means “breath”. His very name suggests that not much was expected from him. So Cain probably would have grown up being told continually that he was God’s chosen, that he was important, that he was “The Man”.
So the time can for both brothers to offer up something to God. Cain came to God trying to merit God’s approval, the evidence is in Cain’s reaction. When the Lord did not respect Cain’s offering he was very angry and his countenance (facial expression) fell. It is only under the law (the knowledge of good and evil) that we expect approval from God based on our works, we feel we merit God’s goodness based on our self righteousness (by the things that we do) and people become very religious and legalistic.
So why was Abel’s offering accepted? Is it because it was blood? No
There is no precedence to suggest that God required blood for offering. Otherwise Cain would have even offered more blood to obtain God’s approval.
The answer is found in Hebrews 11:
“Now faith is the substance of things hoped for, the evidence of things not seen. 2 For by it the elders obtained a good testimony.”
“By faith Abel offered to God a more excellent sacrifice than Cain, through which he obtained witness that he was righteous, God testifying of his gifts; and through it he being dead still speaks.” (vs 4”)
“But without faith it is impossible to please Him,…” (vs 6a)
Paul said in Ephesians 2:8
“For it is by grace you have been saved, through faith–and this is not from yourselves, it is the gift of God-“
Abel’s sacrifice was accepted because it was offered through faith. The writer of Hebrews goes a long way to mention different Old Testament characters that were blessed by God not because of their good works but through faith in Him.
If there is anything that matters now to God and always it is faith in his grace. Cain represents a group of men who would go about seeking to establish their own righteousness and Abel represents those who just submits to God’s righteousness.
Under grace, His unmerited favor towards us we are not looking for favor based on our works but instead we are receiving His unmerited favor based on Christ’s finished work which came by the sacrifice of blood. Guilt and condemnation which is the root of sin was taken away at the cross so that we will find acceptance in the beloved Son.
Under the law you will not go a day without failing which leads to a life under guilt and condemnation and guaranteed to be a life of sin having the upper hand in your life. For sin shall not have dominion over you, for you are not under law but under grace – Romans 6:14 It is only under grace that sin will not have dominion over you. Grace is the primary thing!
Live life with your faith not in your good works or gifts but faith in His grace towards you.