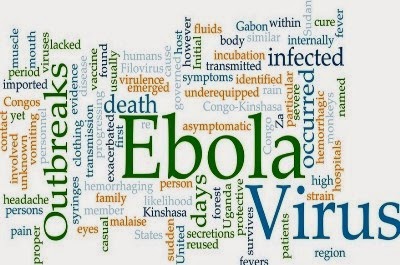 I overhead some women discuss this morning about the Ebola virus. They emphatically stated that the strange presence of the virus was the sign of the end time. They alluded to the fact that all the signs were already in place for the end to occur. Some prophets and pastors like me have already arisen and are telling a troubled world that, “Look! Jesus said that there would be pestilence and earthquakes before the end! We are seeing strange diseases and God is withdrawing his hand of protection! The end is surely near!” And a people not established in scriptures grab that as food. Well so they said about AIDS over 20 years ago.
Did Jesus say that there would be earthquakes, wars and, famines and perils? Of course he did. However, he also said that those things were not, let me repeat that, were not signs that the end was to be near! Read it for yourself in Matthew 24:6/ Luke 21:9). Isn’t there something wrong – inherently wrong – with a theology that turns “these are not signs that the end is imminent” into, “Look, these signs prove the end is near!”?
But, didn’t Jesus and scripture give some signs of the end? Yes. What were those signs?
Elijah was to come, “Before the Great and Terrible Day of the Lord” (Malachi 4:5-6). Jesus said John the Immerser was the predicted Elijah (Matthew 11:11-15, 17:9-13). But John, as Elijah appeared in Jesus’ contemporary generation. Jesus emphatically said of John the Baptizer: “Elijah has already come!”
The outpouring of the Holy Spirit was to occur in the Last Days before the coming of the Lord (Joel 2:28-32). On Pentecost, the Spirit was poured out and Peter said, “This is that which was spoken by the prophet Joel” (Acts 2:15f). The outpouring of the Spirit occurred in Jesus’ contemporary generation.
In Matthew 24:14 Jesus said, “This gospel of the kingdom shall be preached in all the world, then comes the end.” In Romans 16:25-26, Colossians 1:23, etc. Paul said the gospel had been preached into all the world. This happened in Jesus’ contemporary generation. Jesus said that when the Abomination of Desolation appeared his disciples were to flee from Judea because of the coming tribulation. Then, “immediately after the tribulation” the Son of Man would come (Matthew 24:15-29). Church historian Eusebius says the early church fled Judea in about A. D. 66 being commanded to do so by the Lord. The Abomination of Desolation occurred in Jesus’ contemporary generation when the Roman invaded the sacred temple.
The Great Apostasy would be another sign of the Day of the Lord (2 Thessalonians 2:2f). In Matthew 24:9-12 Jesus said the love of the “majority” (NASV) of people would grow cold. He said it would be in his generation (v. 34). The rest of the New Testament documents the reality of that apostasy (Galatians 1:6f).
Here is something significant, which it is either ignored or overlooked by all of the prophecy teachers of our day. Jesus said that the signs of his coming, and the end of the age, would occur in “this generation” (Matthew 24:34). That was his generation. Yet those who hold that Jesus’ coming has not yet occurred seek to redefine the term “this generation,” and make it apply to our generation or to the future.
Because every major sign of the Lord’s coming did occur in the first century generation it is wrong to look for those signs today. Because every major sign occurred in Jesus’ generation it is wrong to redefine “this generation” to mean our current generation or one that is yet future. Because all of those signs occurred in Jesus’ generation Jesus’ coming must have occurred then as well.
The outbreak of Ebola and other diseases, earthquakes and tsunami in Japan and other places is not a sign that the end is near. The end was in AD 70. It was the end of the Mosaic system of worship and world. We are living in the new age of grace today where the earth waits for the manifestation of the Sons of God.
It’s time we inteprete the scriptures in context and deal with our present day issues based on the new covenant. Our victorious living is based on on what we know about the terms of the new covenant and understanding the true nature of God. The finished work of Jesus is our security in a troubled world today.