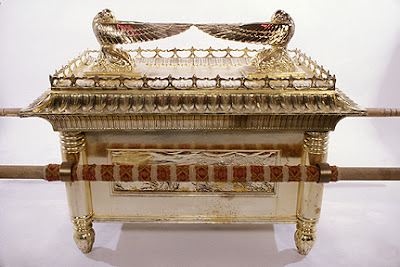 The tabernacle of Moses was a portable sanctuary used by the Israelites from the time of their wandering in the wilderness after the Exodus from Egypt to the building of the temple in Jerusalem (see Exodus 25–27). Within the tabernacle was the Ark of the covenant which included the mercy seat (Hebrews 9:3-5 NKJV).

The ark of the covenant contained the two stone tablets inscribed with the Ten Commandments, which was the most sacred object of the tabernacle and later in the temple in Jerusalem, where it was placed in an inner area called the Holy of Holies. Also within the ark were the golden pot of manna, such as was provided by God in the wilderness wanderings (

Exodus 16:4) and Aaron’s almond rod (Numbers 17:1-13).
On top of the ark was a lid called the mercy seat on which rested the cloud or visible symbol of the divine presence. Here God was supposed to be seated, and from this place He was supposed to dispense mercy to man when the blood of the atonement was sprinkled there.

There was the place where God met with His people. In Exodus 25:22, God said, “And there I will meet with you, and I will speak with you from above the mercy seat, from between the two cherubim which are on the ark of the Testimony…” This place was above the mercy seat of the ark of the covenant, under the wings of the two cherubim. The psalmist calls it “the secret place of the Most High… under the shadow of the Almighty”.

The mercy seat covered the ark which contained the three emblems of man’s rebellion: the golden pot of manna — man’s rebellion against God’s provision, two tablets of stone on which God wrote the Ten Commandments — man’s rebellion against God’s standard, and Aaron’s rod — man’s rebellion against God’s authority. Once a year on the Day of Atonement, the high priest would sprinkle the blood of the sacrificed animal on the mercy seat and so make propitiation for the sins of Israel.
There is a great truth in the structure of the ark of the covenant that speaks of God’s goodness. The emblems which were symbols of man’s failure and iniquity is hidden in the ark and covered by the mercy. God gave them an instruction to not open the ark. Would you believe it? God himself doesn’t want to be reminded of your sins and as well as He didn’t want them either. He wanted to deal with Israel based on His goodness and not theirs. Today is not looking at your sins because Christ is now our mercy seat. He wants you to be Christ-conscious.
So today, it is not the blood of animals that makes propitiation for our sins, but the holy blood of the Son of God. (Romans 3:24–25) The word for “propitiation” in the original Greek text is hilasterion, which actually means “mercy seat”. So Christ our mercy seat has provided eternal cover and cleansing for all our sins. His blood speaks for us and puts God on our side. God does not see our rebellion. He sees the blood of His Son and accepts us! Halleluyah
This is our confidence:  We can come boldly to the secret place of the Most High, in Christ, and feel secure that we have every right to be in God’s presence. We can come boldly to Him to obtain mercy and find grace to help in time of need. (Hebrews 4:16) He will never cast us out.
And because Christ, our mercy seat, covers us with His blood, we are under God’s protection. We are in the secret place of the Most High, abiding under the shadow of the Almighty. Here, no evil will befall us, nor will any plague come near our dwelling. Like the Psalmist said in Psalm 91:1 “He who dwells in the secret place of the Most High shall abide under the shadow of the Almighty.”
God is not witch-hunting you because of any past sin. He laid the punishment of your sins on Jesus. Be confident that God is on your side today. In the secret place of the Most High, we are favored, highly blessed and kept safe from all harm!