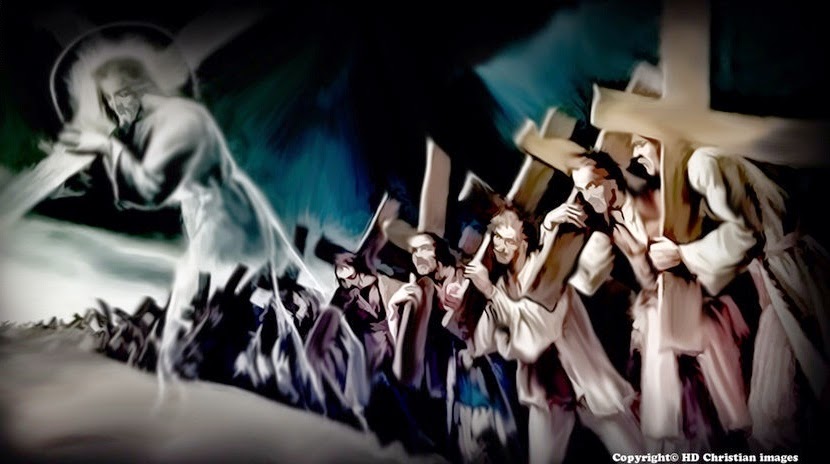 23 And he said to them all, If any man will come after me, let him deny himself, and take up his cross daily, and follow me.
24 For whosoever will save his life shall lose it: but whosoever will lose his life for my sake, the same shall save it.
25 For what is a man advantaged, if he gain the whole world, and lose himself, or be cast away?
26 For whosoever shall be ashamed of me and of my words, of him shall the Son of man be ashamed, when he shall come in his own glory, and in his Father’s, and of the holy angels.
27 But I tell you of a truth, there be some standing here, which shall not taste of death, till they see the kingdom of God.
– Luke 9:23-27


When I used to think of this scripture as young Christian teenager, I used to imagine myself carrying a cross like Jesus did. Then I heard from many sermons how it meant that Jesus was telling us to die out to our old man every day. Dying to self was a very serious message from God towards anyone who wanted to take his Christian walk to higher levels before God could use them.

But what did Jesus mean when He said, “If any man will come after me, let him deny himself, and take up his cross daily, and follow me”? Paul said, “Now if we be dead with Christ, we believe that we shall also live with Him…For in that He died, He died unto sin once…” (Romans 6:8, 10).

Dying to self daily falls short of what Paul was saying. Apostle Paul stated it clear terms in many of his letter that when we became believers, we were baptized into the death of Christ, dying with Him to sin; and that Jesus died but once. How could Jesus die to sin only once and then we are required to die to sin over and over again?

Is it because Jesus was able to die to sin sufficiently once but we have to continue because our death was not complete since we still make stupid makes and err. The real question is it our death that makes sanctified and righteous or his death that we were a part of.

The simple truth is this, “He doesn’t require us to die out to sin on a day to day basis”. Paul said that Jesus died once and that we should “Likewise reckon ye also yourselves to be dead indeed unto sin” (Romans 6:11). To reckon is an accounting term means “give an account of items received”. God wants is to acknowledge receipt of our position in Christ. You should “reckon” or consider yourself dead to sin, just as Christ is dead to sin. Because of His finished work there is no need for me to die again every day, nor is there a need for me to re-crucify myself every day to reach spiritual heights.

This doctrine is very subtly teaching believers that their salvation is only as good as the day is long and that every new day requires a new death to the old man. This insults the finished work, for it claims that the finished work is only finished today, but needs refinished tomorrow.

Jesus’ statement in Luke 9:23 is of two-fold in meaning and application: one is spiritual while the other is physical.

When He made this statement, the cross had not yet happened, so no one standing there would have assumed that dying on a cross was anything more than a physical death. Death on the cross was not even seen as an enviable death since it was reserved for condemned criminals. His statement to the disciples was the equivalent of someone today saying, “Deny yourself and be ready to die by hanging”. We would understand that He meant for us to deny our own selfish desires and be ready to die a martyr’s death.

He admonished his disciples to be willing to lay down our lives on a daily basis for the cause of Christ. His cause was to lay a new foundation that was actually setting aside the law and the prophets because he was to fulfill all. This cause would mean that their Jewish foundation would no longer be the basis for their relationship with God. Faith would be only acceptable platform “But without faith it is impossible to please him:..” (Hebrews 11:6a). This was enough to set the Jewish religious leaders out against Him and his disciples and persecute to death.

Paul said as much when he said, “I die daily” (1 Corinthians 15:31). He wasn’t speaking of spiritual death, for the preceding verse said that he was in jeopardy every hour. See it in context in both the NKJV and The Message.

30 And why do we stand in jeopardy every hour? 31 I affirm, by the boasting in you which I have in Christ Jesus our Lord, I die daily.32 If, in the manner of men, I have fought with beasts at Ephesus, what advantage is it to me? If the dead do not rise, “Let us eat and drink, for tomorrow we die!”

“30-33 And why do you think I keep risking my neck in this dangerous work? I look death in the face practically every day I live. Do you think I’d do this if I wasn’t convinced of your resurrection and mine as guaranteed by the resurrected Messiah Jesus? Do you think I was just trying to act heroic when I fought the wild beasts at Ephesus, hoping it wouldn’t be the end of me?…”

In verse he says that he has fought with beasts at Ephesus (verse 32).
In the same passage when Jesus made the statement we find this important statement in verse 27, “But I tell you of a truth, there be some standing here, which shall not taste of death, till they see the kingdom of God” (Luke 9:27). If Jesus were talking about spiritual death when He said, “take up the cross daily”, why would He now speak of physical death in the same paragraph? “Take up the cross daily” was the willingness to lay down one’s life for Christ’s sake, which He then says, “some standing here shall not taste of death”.

Notice he said that some standing with him would taste death till the kingdom or as John puts it until he comes. This statement was in connection with his famous prophetic about the destruction of the temple and the land of Israel.

As Jesus was sitting on the Mount of Olives, the disciples came to him privately. “Tell us,” they said, “when will this happen, and what will be the sign of your coming and of the end of the age?”(Matthew 24:1-3)

Jesus declared that the Temple and its buildings would be destroyed, and the disciples, no doubt enthralled, asked Him to tell them “when will this happen?” Jesus replied with eight signs of the coming destruction:

One of the signs he mentioned that herald the end of the Mosaic age was the great persecution of the church.

I have covered more about the persecution of the early church which preceded the return of our Lord in judgment toward Israel the Apostate nation in my article. You can read it from this link. http://reigninglife.blogspot.com/2015/01/beauty-and-beauty-persecution-of-early.html

Now the spiritual aspect is the denial of self, which every believer must perform. We all sacrifice some of the things that we always wanted to accomplish; or that we wanted to become in order to do and to be all that God wills for us because of his perfect plan for us. Christianity is a not about having a changed life but about an exchanged life. He gave you His life for you to live it. Self-denial simply means letting Him live his own very life though you. It is letting righteousness reign, letting peace be the umpire and joy in the Holy Spirit flow out through you.

As Paul said that You died to sin the moment that you were saved, so how shall we “live any longer therein?” (Romans 6:2). You need not die again every day; you simply need to trust your Jesus that He is living His life through you. The attempt to die spiritually only subtly lead you back into works where you will fear constantly that you are not “dead enough” or that you haven’t properly crucified yourself.

Let the finished work do its work. Relax and rest in the divine life you have dwelling in you and you will manifest his glory. It works far better than we can!