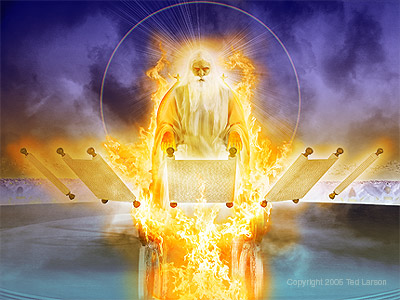 The subject of judgment in the book of Revelation is one that needs clarification especially in the grace community.

We have taught that God no longer judges our sins because they were already judged in Jesus our perfect lamb. We have shared all our sins (yesterday, today and tomorrow) have been paid for. Some of us believe that the wrath of God was exhausted at the cross. Yet we believe God is storing up his wrath to be revealed in the end of global time. There’s a confusion there.

If there is a wrath to be stored then it means that redemption is not complete and that he is still waiting on humanity to participate in dissolving his anger over sin. Is God willing to save people now against his own wrath for them in the future.

The book of Revelation holds the key to the answers. The book was written about the close of the Old covenant age administered and governed by the Mosaic laws. The judgment therein was about the removal of that institution that introduced the wrath of God.

The early church was in a transition of the old covenant age and into the new covenant age. Those who didn’t receive the gospel refused the offer of salvation that was based on the righteousness of God. They were willing to continue to pursue a righteousness that couldn’t save them.

Romans 10:1-4 KJV
Brethren, my heart’s desire and prayer to God for Israel is, that they might be saved. [2] For I bear them record that they have a zeal of God, but not according to knowledge. [3] For they being ignorant of God’s righteousness, and going about to establish their own righteousness, have not submitted themselves unto the righteousness of God. [4] For Christ is the end of the law for righteousness to every one that believeth.

They condemned themselves to be judged by their OWN WORKS. Now notice the judgment in Revelation.

Revelation 20:12 KJV
And I saw the dead, small and great, stand before God; and the books were opened: and another book was opened, which is the book of life: and the dead were judged out of those things which were written in the books, ACCORDING TO THEIR WORKS.

That throne judgment is not in our future. John explains over and over that the fulfillment of those prophecies including the throne judgment was imminent upon the primary audience/readers. It was a closure on that old covenant age.