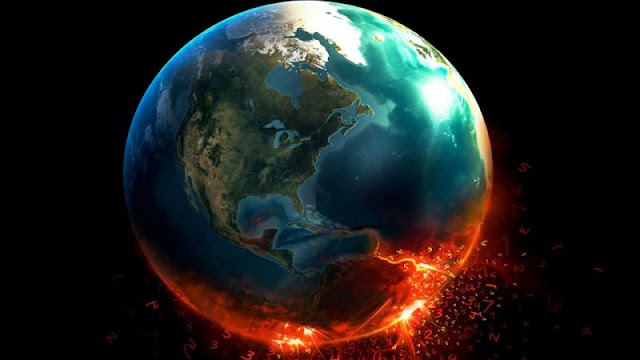 When God spoke to Isaiah about the coming destruction upon Babylon after they had brought to ruins and captivity, this is the prophetic/apocalyptic language he used;
6 Wail, for the day of the Lord is at hand!It will come as destruction from the Almighty.7 Therefore all hands will be limp,Every man’s heart will melt,8 And they will be afraid.Pangs and sorrows will take hold of them;They will be in pain as a woman in childbirth;They will be amazed at one another;Their faces will be like flames.
9 Behold, the day of the Lord comes,Cruel, with both wrath and fierce anger,To lay the land desolate;And He will destroy its sinners from it.10 For the stars of heaven and their constellationsWill not give their light;The sun will be darkened in its going forth,And the moon will not cause its light to shine.
13 Therefore I will shake the heavens,And the earth will move out of her place,In the wrath of the Lord of hostsAnd in the day of His fierce anger. (Isaiah 13)
This is the same language employed by the Apostles in the first century with regards to the prophecy of the destruction of national Israel that stood as an enemy of God in the dawn of the new covenant. Israel had become apostate again and this time just like their fathers were killing the prophets and people sent to her. Jesus did quite a statement on this in Matthew 23 of which he said in vs 29-36
29 “Woe to you, scribes and Pharisees, hypocrites! Because you build the tombs of the prophets and adorn the monuments of the righteous, 30 and say, ‘If we had lived in the days of our fathers, we would not have been partakers with them in the blood of the prophets.’
31 “Therefore you are witnesses against yourselves that you are sons of those who murdered the prophets. 32 Fill up, then, the measure of your fathers’ guilt. 33 Serpents, brood of vipers! How can you escape the condemnation of hell? 34 Therefore, indeed, I send you prophets, wise men, and scribes: some of them you will kill and crucify, andsome of them you will scourge in your synagogues and persecute from city to city, 35 that on you may come all the righteous blood shed on the earth, from the blood of righteous Abel to the blood of Zechariah, son of Berechiah, whom you murdered between the temple and the altar. 36 Assuredly, I say to you, all these things will come upon this generation.
The writer of Hebrews states about the shaking of the heavens and earth that was to happen in their time and generation. This is not a literal shaking as being popularly propagated. One of the major reasons why the predictions about the end of the world has failed and will keep failing.
Rather the author is referring to the removal of a world, kingdom and the end of an era. This time the end of the Jewish world founded the law and the prophets and Mosaic age.
He tells them in chapter 12 not to be stubborn to the voice that speaks from Zion and not Sinai. This is after his revelation of the fact that they were no longer stationed at Sinai but now in Zion where God and the angels had resettled. The interesting thing is that the voice that speaks is the Blood of Jesus. This is why he says it speaks better things than the blood of Abel.
25 See that you do not refuse Him who speaks. For if they did not escape who refused Him who spoke on earth, much more shall we not escape if we turn away from Him who speaks from heaven, 26 whose voice then shook the earth; but now He has promised, saying, “Yet once more I shake[h] not only the earth, but also heaven.”[i] 27 Now this, “Yet once more,” indicates the removal of those things that are being shaken, as of things that are made, that the things which cannot be shaken may remain. (Hebrews 12)
The shaking of that former heaven and earth will herald the establishment of God’s kingdom where grace would be the life of worship and not the Mosaic law.
This is the same connection that Peter draws to speak about the destruction of the heavens and earth in alignment with the Hebrews writer.
10 But the day of the Lord will come as a thief in the night, in which the heavens will pass away with a great noise, and the elements will melt with fervent heat; both the earth and the works that are in it will be burned up.[
12 looking for and hastening the coming of the day of God, because of which the heavens will be dissolved, being on fire, and the elements will melt with fervent heat?13 Nevertheless we, according to His promise, look for new heavens and a new earth in which righteousness dwells. (2 Peter 3:10,12-13)
He also confirms that removal of that former heaven and earth will see the establishment of a world where righteousness dwells. This is why the grace message is the voice of the kingdom. For it declares that the righteousness of God is revealed in the gospel which is the power of God.
It will be just a total disrespect proper exegesis for us to declare that God intends to destroy the literal heavens and earth in order to prove his judgment on all men. This is not the grace message and certainly negates the impact of the finished works of Jesus in spreading the glory of the kingdom all over the face of the earth. The old world has been removed so that the one that cannot be shaken will remain eternally. Halleluyah!