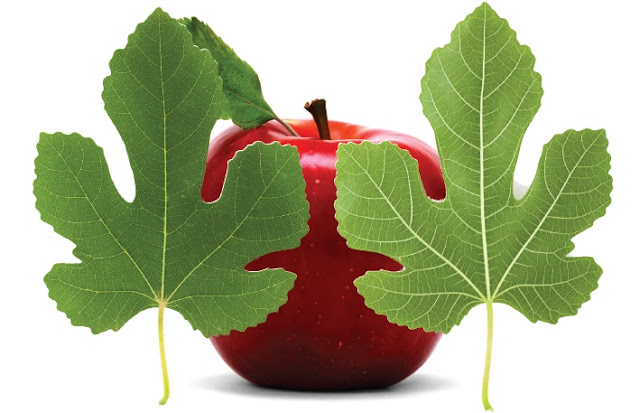 After Adam and Eve had sinned by eating from the tree of the knowledge of good and evil, their eyes were opened. Seeing their nakedness for the first time, Adam and Eve clothed themselves in an apron made of fig leaves. Now before that moment they had always been naked and they had the glory of God shinning on and in them.
Now that sin had entered, the glory had departed as one version says “Man had sinned and forfeited the glory of God. The journey to salvation being provided at the cross began . As a result of their sinful act they were instantly judged and condemned in their hearts and consequently afraid of the wrath of God.  All of a sudden this First Couple decided to hide their nakedness from their own eyes with fig leaves, and stayed in the bushes to hid from the eyes of God. Like they thought that was possible.
There are still some today who have hid in bushes because they believe that they have failed God. They turn deaf ears to His sweet voice calling for them. The truth is that if our sin could separate us from Him then he won’t have bothered showing up for the appointment with Adam.
The fig leaf is very large, and is probably why Adam used it for covering. The only problem was that the leaf was separated from the its source. It was only a matter of time for it to dry out, causing it to wither and die. It did not take long for Adam to notice that his covering wasn’t covering so much after all. It still exposes his shame.
Based on the principle of first mention the Fig leaves became a symbol of self-righteousness. Adam puts these on as men put on works; to cover our failures. The fig leaf is our attempt to cover our nakedness with our good works. The garden was the birthplace of religion with Adam being the father and High Priest of religion.
The fig tree lesson is Adam’s attempt to cover-up his failure and that is the basis for all works righteousness in the world today. Any time that man does something to make up for his faults, or to hide his short-comings, he is taking a cue from Adam, and fashioning an apron of leaves. There are people soaked in religious activities to clear up their books with God to make up any area of short-comings in their life. As there are also some Christians who have been told that if they missed paying their tithe in a particular month, there they would have to pay it later with added interests.
All of our works can never bring us righteousness, for if they could, then there was no need for Christ to die (Galatians 2:21). Christ would have been uncessary if there was anything that could have paid the price of sin. Christ’s finished work at the cross had frees us from the vicious cycle of dead works to achieve right standing with God. Paul sated in Romans 3:21-22, 27-28
“But now the righteousness of God apart from the law is revealed, being witnessed by the Law and the Prophets,
Where is boasting then? It is excluded. By what law? Of works? No, but by the law of faith. Therefore we conclude that a man is justified by faith apart from the deeds of the law.
Because of the work of Christ’s cross, we are now justified simply by faith, and we have been given a different robe. Just the same way that God gave Adam new clothing, one that was smeared with blood. His righteousness is one purchased for us in the sacrifice of Jesus at the cross.
Isaiah’s prophecy gives us a revelation concerning those who accept Christ and his redemptive work:
“I will greatly rejoice in the LORD, my soul shall be joyful in my God; for he hath clothed me with the garments of salvation, he hath covered me with the robe of righteousness, as a bridegroom decketh himself with ornaments, and as a bride adorneth herself with her jewels” (Isaiah 61:10).
No longer do we wear garments of figs, fashioned by our good works or our religion, but we wear His garments of salvation, and we have been covered with a robe of His righteousness. This white robe cannot be made of our works. It is not glorious because of how well we have behaved in church and humanitarian we appear. As Isaiah says about our own righteousness:
“But we are all as an unclean thing, and all our righteousness’ are as filthy rags; and we all do fade as a leaf; and our iniquities, like the wind, have taken us away”(Isaiah 64:6).
It is not our sins that are as filthy rags but our righteousness. The prophet is taking us back to the garden experience of the faded leaves of Adam’s apron of figs which Joseph Prince called “Salad Dressing”.
In the parable Jesus narrated which we know as the Parable of the prodigal son, the Father gave the Prodigal Son, “the best robe” (Luke 15:22). He never wanted His son to forget that he was a son, and the robe would remind him of that. He restored to his place of Sonship. We can wear with the clothing with pride because it is God who has clothed us and now there is no one who can question our place in Him. The acknowledgment of Sonship is enough to bring His righteousness out of us because it is enough to bring Jesus out in us also.
Wear his robe with praise and thanksgiving and let His praise resound from your heart. His suit looks good on you! No more figs!