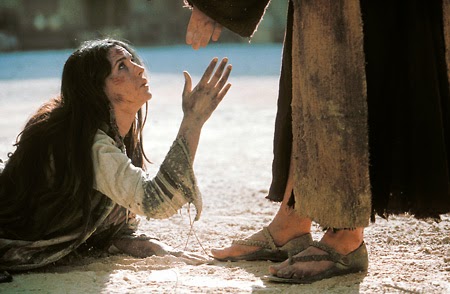 8 But Jesus went to the Mount of Olives. 2 Early in the morning He came again into the temple, and all the people were coming to Him; and He sat down and began to teach them. 3 The scribes and the Pharisees *brought a woman caught in adultery, and having set her in the center of the court, 4 they *said to Him, “Teacher, this woman has been caught in adultery, in the very act. 5 Now in the Law Moses commanded us to stone such women; what then do You say?” 6 They were saying this, testing Him, so that they might have grounds for accusing Him. But Jesus stooped down and with His finger wrote on the ground. 7 But when they persisted in asking Him, He straightened up, and said to them,“He who is without sin among you, let him be the first to throw a stone at her.” 8 Again He stooped down and wrote on the ground. 9 When they heard it, they began to go out one by one, beginning with the older ones, and He was left alone, and the woman, where she was, in the center of the court.10 Straightening up, Jesus said to her, “Woman, where are they? Did no one condemn you?” 11 She said, “No one, [a]Lord.” And Jesus said, “I do not condemn you, either. Go. From now on sin no more.”]
John 8:1-11
This is one of the most popular stories that captures the heart about the person of Jesus. Many teachings have covered the things that occur in this passage of scripture, but there is need to take a close look at it exclusively. The wisdom of Jesus in handling this matter also reveals the beauty of this glorious new covenant. It reveals the heart of the Father in reconciling the lost.
The men that bring the woman caught in the act of adultery did so based on their Jewish laws. She was caught sleeping with a married man, thus she is guilty. Although the question that always come to my mind is, “Where is the man?” Obviously these men are not concerned with actually keeping the Law. They wanted to see if they can could put Jesus in a trap. Mosaic Law says that the adulteress be stoned to death, so they are so curious to see what Jesus will say.
Jesus “stooped down, and with His finger wrote on the ground” (John 8:6). There has been much speculation over time as to what He wrote. Some say that He may have written down their hidden sins to remind them what they had done in order to expose them. Some think He may have written out the 10 Commandments. Whatever it was, it did nothing to convince the crowd who “continued asking Him” (verse 7).
I would like to point out that it is more important to note where He wrote than to know what He wrote. The men found Jesus sitting in the temple courtyard, which was a broad floor of smooth stone. The floor would have been covered with a rather thick layer of dust as there was many people walk on that path daily. When Jesus wrote on the ground, He was actually writing on the stone floor, pushing the dust with his fingers the way one might write “Wash Me” on the back glass of a dirty car. Though the words have been lost through time, the method still preaches its importance.
After instructing the men that they who were without sin should cast the first stone, the crowd drops their rocks and disperses, one by one. Jesus has given them permission to kill the woman, thus fulfilling Mosaic Law.
Please note  that He never told them not to kill her; He just told them to be sure that they were qualified. She certainly deserved to die, but did they deserve to be the ones to execute her? Is there a man on earth that qualifies to judge you? The only one that is qualified to condemn has chosen not to.
Jesus turns to the woman and asks her where her accusers have gone. He is pointing out to her that she is free to go, for there is no one left standing who was an eye witness to her crime. Instead of running, she stays near the man that writes on the ground and He gives her the gift of no condemnation, “Neither do I condemn thee: go, and sin no more” (John 8:11).
We see God wrote the 10 Commandments (Law) with His own finger on Mt. Sinai. Jesus who is the word, that dwelt with God and who is God wrote again. When He wrote on the ground of the temple, Jesus was using the same finger that had etched the Law into stone to write a new law in our hearts. The Old Covenant demanded that all sinners die, but the New Covenant has provided one man to die for us all. We could never cast the first stone, for we all deserve to die, but Jesus has written His love and grace on the stones of our temple and we can now all go free.
Who is he who condemns? It is Christ who died, and furthermore is also risen, who is even at the right hand of God, who also makes intercession for us. 35 Who shall separate us from the love of Christ?
–    – Romans 8:34-35a
You have been given the gift of no condemnation, now go and sin no more. This free gift is the key to victory over sin. The stone has been rolled away and now you are in God’s books. His death is your judgment now you can live free.