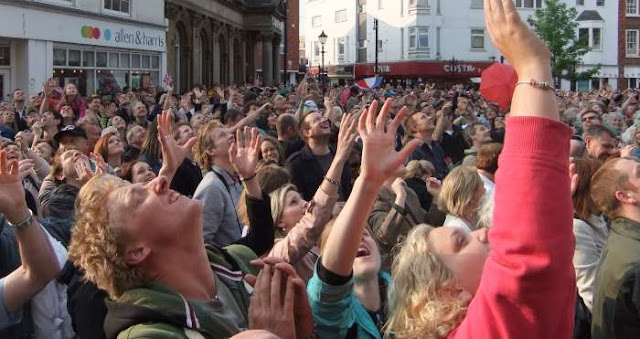 BEHOLD, HE IS COMING WITH THE CLOUDS, and every eye will see Him, even those who pierced Him; and all the tribes of the earth will mourn over Him. So it is to be. Amen. (Revelation 1:7 NASB)
Many have read this verse and have been quick to refer to a coming of Jesus where the whole world will see at once in the cloud. I think we may not have taken into consideration the fact that the world does not even operate on the same time zone. There is a need to look closer at this verse again since there is a qualifier as to whose eyes will see Him in his return.
This passage speaks of Christ’s Second Coming in judgment on Israel. Cloud comings in the Old Testament is prophetic language of God’s judgment on a particular nation.
So who was this coming in reference to? Israel, America, Nigeria, Philipines or who?
The coming spoken of in Revelation is to be upon those “who pierced Him.” Who is that? The New Testament consistently points out that those who pierced Christ were the first century Jews. Also those who pierced Christ are “the tribes of the earth” (or the land) as the KJV puts it, which refers to national Israel.
This book introduces its readers to the theology of judgment and, specifically, God’s judgment sanctions against the nation of Israel.Israel had crucified the Lord and publicly called God’s judgment down on themselves as they committed themselves to a performance driven covenant:
And all the people said, “His blood shall be on us and on our children!” (Matthew 27:25)
God’s judgment on Israel in AD 70, matched their crime, the crucifixion of Christ. This crime was the worst in history, so their punishment was also the worst in history. They killed their own covenant partner. The greatest implication in a broken covenant is death. To call anything else “the Great Tribulation” is to downplay the immensity of that generation’s crime.
Jesus prophecy of the destruction of the temple and the Tribulation in Matthew 24 is a perfect fit for seeing the book of Revelation. Revelation is John’s version of the Olivet Discourse and his expansion on it. Revelation 1:1 says the events of the book are shortly to come to pass. In the Olivet Discourse Christ says:
“Truly I say to you, this generation will not pass away until all these things take place.” (Matthew 24:34 NASB)