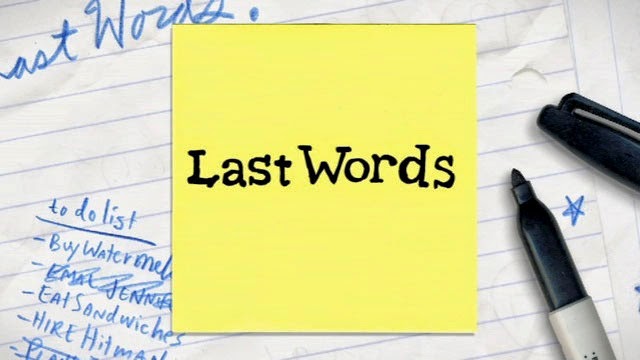 Much wisdom can be learned from men when they stare in the face of death or are in their death bed. In their final words, we get a brief insight into what is most important to them in this life, words they want their audience to hold on to and live with.

The last words of the 1st century leaders are pregnant which much wisdom for us to make victorious living. What might Paul or Peter or John have said in their final moments? We may never know here, but we do know the last thing that they wrote down as inspired by the Holy Spirit.

Peter said, “But grow in grace, and in the knowledge of our Lord and Savior Jesus Christ. To him be glory both now and forever. Amen.” (2 Peter 3:18)

Paul’s final writing comes from a prison cell in Rome, where he writes to his young friend Timothy, “The Lord Jesus Christ be with thy spirit. Grace be with you. Amen.”

John in the book of Revelation did not beg for the return of Jesus, but John had one more thing to say, “The grace of our Lord Jesus Christ be with you all. Amen.” (Revelation 22:21)

What is the common denominator? Grace!  Their final words was not works of righteousness or shows of emotion that turned their hearts, but it was the message of undeserved grace and favor. Grace is the principal and that was the main message.

Just like the writer of Hebrews said in the last chapter 13:9
” Do not be carried about by different and varied and alien teachings; for it is good for the heart to be established and ennobled and strengthened by means of grace (God’s favor and spiritual blessing)” (AMP)

This grace is not a topic or part of our curriculum. It is a person and He is Jesus. When our lives are built on His grace, we find ourselves living out his divine plan that was established before the foundation of the world. This grace did not appear because of sin but was far before sin became an issue. He is the reason for creation and redemption.

So I say grace is the principal thing and let all your living by His grace towards you. Grace and peace be multiplied unto you in Jesus name. Amen.