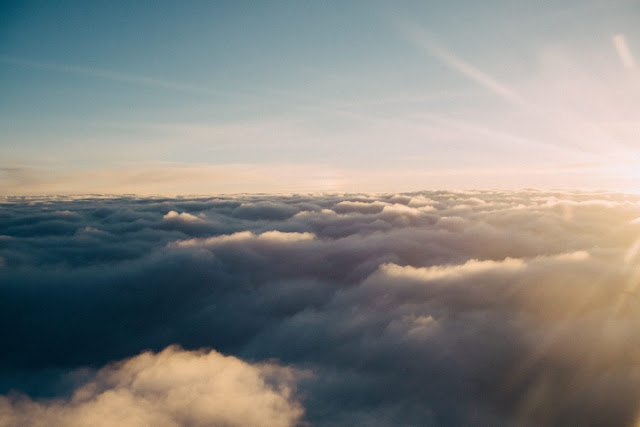 Then the sign of the Son of Man will appear in heaven, and then all the tribes of the earth will mourn, and they will see the Son of Man coming on the clouds of heaven with power and great glory. – Matthew 24:30

We continue from where we stopped in respect on understanding the coming of the son of man. Now in order to understand what Jesus is saying, we need to understand the principle and theme that is behind “coming in the clouds.”

God’s “coming on the clouds of heaven” is a symbolic way of speaking of His presence, judgement and salvation. If go through the Old Testament you will note that God was coming “on clouds,” in salvation of His people and judgement of His enemies.

The Coming on the clouds does not suggest a physical appearance of him using the clouds as backdrop but it indicates His Presence:

10 Now it came to pass, as Aaron spoke to the whole congregation of the children of Israel, that they looked toward the wilderness, and behold, the glory of the LORD appeared in the cloud. Exodus 16:10

And the LORD said to Moses, “Behold, I come to you in the thick cloud, that the people may hear when I speak with you, and believe you forever.” – Exodus 19:9

Then the LORD came down in the cloud, and spoke to him, and took of the Spirit that was upon him, and placed the same upon the seventy elders; and it happened, when the Spirit rested upon them, that they prophesied, although they never did so again. – Numbers 11:25

The coming in cloud also symbolized Salvation. We can see this in Psalm 18. David spoke of his deliverance from Saul using this same apocalyptic language.
He bowed the heavens also, and came down
With darkness under His feet.
10 And He rode upon a cherub, and flew;
He flew upon the wings of the wind.
11 He made darkness His secret place;
His canopy around Him was dark waters
And thick clouds of the skies.
12 From the brightness before Him,
His thick clouds passed with hailstones and coals of fire. – Psalms 18:9-12

If we were to take this literally there is no way this was fulfilled in David’s time. What David employed here in expressing his deliverance is poetic language. The poetic language of that age and locality is not the same as we have now. Theirs used more imageries and symbolisms to convey a message in a repetitive format.

The coming on the clouds also meant Judgement. The thought of God’s coming in the clouds especially in the Jewish mind was also associated with His judgement over his enemies.

The burden against Egypt.
Behold, the LORD rides on a swift cloud,
And will come into Egypt;
The idols of Egypt will totter at His presence,
And the heart of Egypt will melt in its midst. – Isaiah 19:1

If you do a study in chapter 20 you will discover that God used the Assyrians as instruments to execute judgment on Egypt, but the text says, “The LORD rides on a swift cloud…, Egypt will totter at His presence.” His presence was made known in judgement. But it was the Assyrians who were literally present.

This same language was also employed in the narrative of Nineveh’s fall as written in the book of Nahum.

The burden[a] against Nineveh. The book of the vision of Nahum the Elkoshite.
2 God is jealous, and the LORD avenges;
The LORD avenges and is furious.
The LORD will take vengeance on His adversaries,
And He reserves wrath for His enemies;
3 The LORD is slow to anger and great in power,
And will not at all acquit the wicked. – Nahum 1:3
The mountains quake before Him,
The hills melt,
And the earth heaves[b] at His presence,
Yes, the world and all who dwell in it.
6 Who can stand before His indignation?
And who can endure the fierceness of His anger?
His fury is poured out like fire,
And the rocks are thrown down by Him. – Nahum 1:5-6
Nineveh was destroyed by the invading armies of the Chaldeans and Medes in 612 BC.

There was no literal of God out of heaven on the clouds. This too is a fulfilled event.

Similar language can also be seen in the following verses from the Old testament.
Blow the trumpet in Zion; sound the alarm on my holy hill. Let all who live in the land tremble, for the day of the LORD is coming. It is close at hand—a day of darkness and gloom, a day of clouds and blackness. Like dawn spreading across the mountains a large and mighty army comes, such as never was in ancient times nor ever will be in ages to come (Joel 2:1-2)

When Jesus said he would come as the son of man on the clouds, He was using the apocalyptic language of the prophets to identify himself as the Messiah who would judge his adversaries. What did they understand? They saw what it meant to them, It simply meant “to come in judgment upon a city or nation,” We will see in the following verses where this phrase was used and applied as we must let scripture interprete scripture.

Now that we have seen the Jewishness of the context, we can understand that:
(1) The disciples were asking about when Jesus would “come” in judgment upon Jerusalem,
and 2) Jesus responded with many signs that would lead up to verse 30 of Matthew 24, where He would finally “come on clouds” and bring judgment.
In the book of Revelation chapter 1, John confirmed same in vs 7

Behold, He is coming with clouds, and every eye will see Him, even they who pierced Him. And all the tribes of the earth will mourn because of Him. Even so, Amen.

He was commissioned by God to send the message to the 7 churches in Asia about his coming. This coming was still described as coming on clouds. The message of the book of Revelation was primarily to a Jewish audience who were expecting Jesus return in judgement over the nation of Israel.

This is why Caiaphas reacted the way he did because he knew that only God came on clouds. He called it blasphemy. He saw it that Jesus claimed deity. He knew that Jesus was stating to be the, Son of man and Messiah of Daniel 7.

Notice what Jesus says to Caiaphas in: Mark 14:62
62 Jesus said, “I am. And you will see the Son of Man sitting at the right hand of the Power, and coming with the clouds of heaven.”

If look again you will see that our text says that at the time of His coming, “and then shall all the tribes of the earth mourn.” The word “tribes” is a reference to Israel. Gentiles are not referred to as “tribes” in the Bible. It is simply referring to the twelve tribes of Israel. This is what John refers to in his prophecy.

BEHOLD, HE IS COMING WITH THE CLOUDS, and every eye will see Him, even those who pierced Him; and all the tribes of the earth will mourn over Him. So it is to be. Amen. (Revelation 1:7 NASB)

John said that Jesus was coming “soon” and “quickly” and that the “Jews,” those who pierced him, would mourn at his coming. The coming spoken of in Revelation is to be upon those “who pierced Him.” Who is that?

In all honesty we must see that this is not a physical, bodily coming of Christ, but a coming in judgement over the apostate nation of Israel. The idea of “seeing” as coming in the Greek is not physically seeing but “to recognize, to be aware, to perceive.” THE DESTRUCTION OF JERUSALEM WOULD CAUSE THE TRIBES OF ISRAEL TO RECOGNIZE THAT JESUS WAS INDEED THE SON OF MAN AND THE MESSIAH.

It is important this localized prophecy has been fulfilled and there is no need for us to be shaken now about it. He did it so that the judgment would be passed us for revel in the glory of His kingdom.
See you at the next installment. Grace to you.