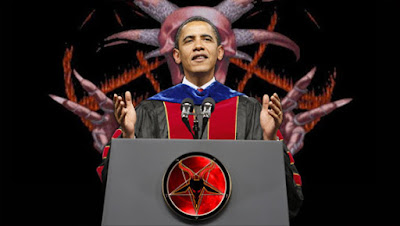 The first U.S. president suspected of being the Antichrist was Franklin Delano Roosevelt. Roosevelt’s extraordinary influence and desire to form a worldwide United Nations raised the suspicions of many conservative Christians.
Not forgetting that the same was also believed about Abraham Lincoln being under the influence of the Antichrist.
They said that Ronald Reagan was the Antichrist in 1988, each of his three names has 6 letters apiece.
Some Christian leaders were far convinced that President Bill Clinton was the antichrist too just as some believed beyond a reasonable doubt thatJimmy Carter was going to be.
In 2000, it was the turn of Pres. George Bush, it was said of him that  he was “one of the key figures leading the church away from Jesus” and therefore He was the Antichrist.
Now it is the turn of Pres. Obama because of some of his unpopular decisions and Muslim background. He even has the most “Antichrist” figurines existing online.
What is common is all these? They all failed to nail the truth. Why? They are looking for someone outside the timeframe, circumstance and relevant audience. It’s like looking for an ancient Egyptian chariot in a BMW showroom.
The early Church had heard that antichrist (false teaching) was coming, but they had not heard that the Antichrist (a one-world ruler) was coming. The insertion of the and the capitalization of Antichrist was added 1500 years later by the translators.
To John the term antichrist refers to Gnosticism (false teachers) and this strongly connects knowing that Jesus had warned his disciples in Matthew 24 about the coming of false teachers. The Gnosticism that John addressed in First and Second John was the false teaching that Jesus predicted.In verse 18 it continues, “…even now many antichrists have come…” (1 John 2:18). In other words, many false teachings had already come: Gnosticism, including the Nicolatian heresy, and the Judiazers’ heresy which is mentioned in Rev. 2:6,9,15; 3:9. John finishes this verse with, “This is how we know it is the last hour” (1 John 2:18). This again shows that John was referring to Jesus’ prediction in Matthew 24 that one sign of the coming destruction of Jerusalem would be false teachers.
So the appearance of Gnostic heresy and other false teachers was a sign of it being the last hour before the end of the Mosaic age.
People are inheriting lies in religion and fears and not making the best of the Kingdom of God. The kingdom is the only solution in the world today. This apprehension can only stop when truth is resounded from the mountain tops.
Jesus came to set up His Kingdom, and He said that it would continually grow. This is the concern of the church even in the midst of tribulation and extremism from Islamist cults like ISIS. The Kingdom of Heaven is like a mustard seed planted in a field. It is the smallest of all seeds, but it becomes the largest of garden plants; it grows into a tree, and birds come and make nests in its branches (see Matt. 13:31-32).