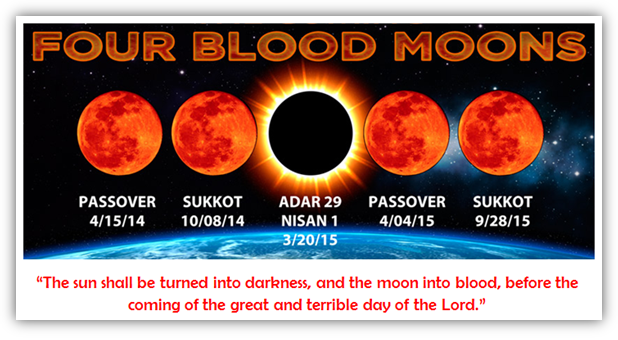 Mark Biltz and John Hagee have indirectly hinted that the second coming of Christ, the battle of Gog and Magog or Jesus planting his feet on the mount of Olives based on Zech 14, Joel 2 and Matthew 24 or some other huge catastrophic event on from April 14th through 23 September 2015.

They have taken literally the statements “the moon shall turn to blood” and are using to predict a coming and many forget that the book of Revelation informs us that they are signs. Based on the timing of the 2nd coming it means we are already in the millennial reign of Christ.

Hagee says Joel 2:31 “the sun will be darkened, the moon will be turned to blood” is going to be fulfilled in the following:

The blood moons which scientists have informed us called Tetrads. According to scientists this tetrads (four consecutive lunar eclipses) are common over last 4000 years:

Biltz has figured out When will the Messiah come. September 23, 2015. And yet Jesus said, “…of that day and hour no one knows, not even the angels in heaven, nor the Son, but only the Father.” (Mark 13:32) In verse 33 He says, “Take heed, watch and pray; for you do not know when the time is.” Are we to believe that Biltz knows the time, but the Lord Himself does not?

Their public videos and the books look remarkable and convincing but even a superficial examination exposes the error that leads people away from truth. The unfortunate thing is that many Christians do not even study their Bible when it comes to issues like this.

So they someone do their study for them.
A cross study of their statements reveals a Zionist theology. Biltz and Hagee are huge proponents of national Israel and believe that the Jews remain God’s chosen people. Hagee believes the Jewish people will be saved without becoming Christians before they die. Biltz is part of the Hebrew Roots movement, which casts doubt on the writing of the apostle Paul, and affirms that the Jewish nation “…will fulfill their mission in taking Torah to the nations.” The apostle Peter confirmed and accepted the writings of the apostle Paul as Scripture (2 Peter 3:14-16). There is no mission to take the Torah to the nations – the Torah is a dead law (Romans 10:1-4; 2 Corinthians 3:7-18; Ephesians 2:14-16; Colossians 2:14-17; Hebrews 8:6-13; etc.).

Absolutely, the Bible speaks of the celestial bodies being used for signs, and there are a number of times in the Scriptures where this was the case (some are listed above). Language about the sun, moon and stars is used prophetically of the fall of Babylon (Isaiah 13:10), the destitution of Egypt (Ezekiel 32:7), the destruction of Jerusalem in 70 AD (Joel 2:10, 31), etc.. But, here’s the thing: the lunar eclipses that Biltz and Hagee are claiming to be signs of impending event in Jewish history are not foretold in the Bible.

God’s word did not speak about tetrads of lunar eclipses being associated with events in Jewish history to take place in the 1400s, the 1900s, nor the 2000s. The significance of these tetrads and the stated events is entirely based upon their Zionist theology, which as indicated above, is contrary to the Bible.

Joel 2:28ff is not about the Messiah’s return in our time and age. The Bible has already revealed what the text is about. In Acts 2, where the beginning of the church is recorded (Acts 2:38-47), Peter declared, “…this is what was spoken by the prophet Joel…” (v 16). Joel’s prophecy spoke of the gifts of the Spirit and the message of salvation. Both of these were revealed on that day.

The “Four Blood Moon” theology of Biltz and Hagee is “Endtime error” in circulation. The supposed significance to this fairly common celestial occurrence is just to further postulate the error of the 2nd coming of Jesus which took when he appeared in judgment over Israel in 70AD. It is not something that God has revealed, either through Scripture or to them.

Biltz and Hagee focus on the three mentioned above because they perceive a connection between these celestial activities and major events in Jewish history. Their prediction involves the destruction of Iran and some Arab nations. These are false predictions like the over 400 I have personally seen or read. The problem is that they put God’s children in fear and drive them to works-based Christianity. The above scriptures have already been fulfilled in 70AD when Jerusalem and the temple was destroyed.

Be not afraid the Kingdom is expanding and that is the most important news we need to hear.