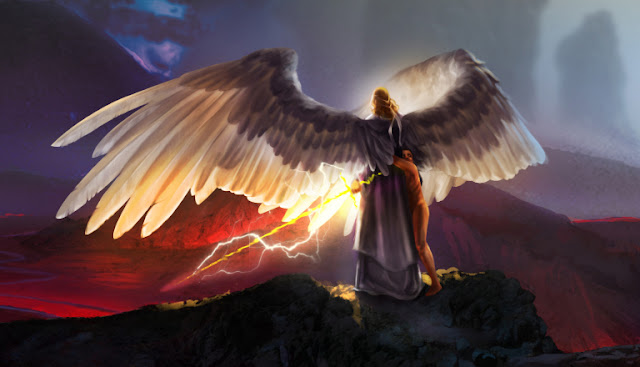 In Genesis 3 when God drove man out of the Garden and placed at the east of that Garden Cherubims that wielded a flaming sword which turned every way, to keep man from eating of the Tree of Life and living forever in a fallen state.
“So He drove out the man; and He placed cherubim at the east of the garden of Eden, and a flaming sword which turned every way, to guard the way to the tree of life.” (Gen 3:24)
The sword thus becomes a symbol of God’s judgment against the sin of man. The cherubiums also symbolized agents of judgment over sinful man.
This happened after man had taken out of the tree of the knowledge of good and evil, a type of the Mosaic law. This is the first time the word “Sword” is used in the bible. The flaming sword which turned every way formed a door or if would a “wall” that prevented access to God’s delight (Eden).

In Zechariah 13:6, 7, Zechariah prophesies of the sword, which comes after a verse that tells us of the arrival of Christ on this earth and his journey to the cross.
And one will say to him, ‘What are these wounds between your arms?’ Then he will answer, ‘Those with which I was wounded in the house of my friends.’ (verse 6)
This stands as the pathway Jesus the messiah would take on his way to the cross. He came unto his own but they did not receive him. Instead he was betrayed, rejected and killed at the hands of his own people. This surely is the context for the following verse.
“Awake, O sword, against my shepherd…” (Verse 7). There is a call for the sword, held in reserve outside of Eden to rise up in judgment, a final judgment. This sword represents God’s wrath against the sin of man which was a cancer in creation. God did not kill Adam at Eden, someone had to stand up on behalf of humanity to receive that judgment into himself; that someone will be the shepherd, which Jesus says is Himself
“I am the good shepherd. The good shepherd gives His life for the sheep.”
(John 10:11).

“…smite the shepherd…” (Verse 7).  Jesus is the shepherd that gave up his life for the sheep to enter into the green pasture and enjoy the still waters.  Jesus was not killed at Calvary, instead He, “gave up the ghost” (John 19:30).

He was smitten on the cross, which caused 3 hours of darkness at the cross, during which Jesus bore the sins of the whole world.
It continues by saying that;
“…and the sheep will scatter…” (Verse 7).
To point his disciples to the fact that his mission on earth was to restore man to the garden relationship by death on the cross, Jesus quotes this same place from Zechariah just before going to the Garden of Gethsemane,
“All ye shall be offended because of me this night: for it is written, I will smite the shepherd, and the sheep of the flock shall be scattered abroad” (Matthew 26:31).
Christ’s trial and death on the cross scattered His sheep, with only one disciple remaining at the cross to watch Him die. It wasn’t only his disciples that scattered but also those had seen his goodness in his miraculous acts. None was even found to even defend against him being chosen over Barabbas.
What creation did not know was that Father was reconciling the world through Jesus’ sacrifice. This message was also hidden in the Mosaic temple. Where? The temple veil.
If you have a second look at the temple veil you will see the message there. 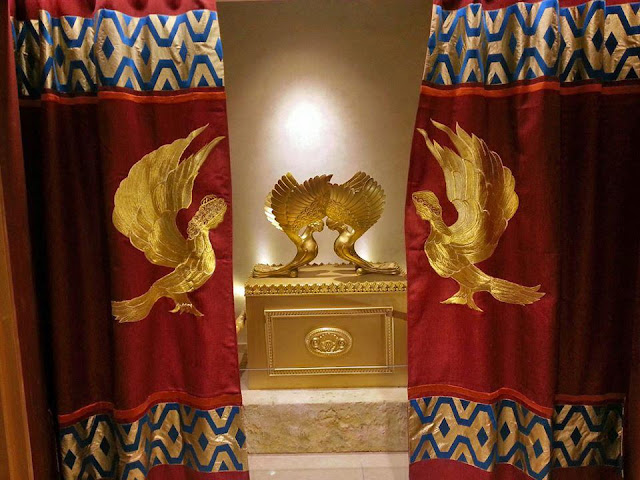 In Exodus 26:31 God told Moses
“For the inside of the Tabernacle, make a special curtain of finely woven linen. Decorate it with blue, purple, and scarlet thread and with skillfully embroidered cherubim.”(NLT)
The veil was a reflection of the entrance to garden of Eden. Cherubs embroided on the temple veil was to remind man that he could not enter in without sin being atoned for. Only the High priest could enter once a year after having made atonement for his own sins. Going past the veil was to invite judgment and death. The most holy place was known as where the presence of God was separated by the veil. The only way in was through that veil.

Jesus also gave a clear picture when He told His disciples, “Now is the judgment of this world: now shall the prince of this world be cast out. And I, if I be lifted up from the earth, will draw all men unto me” (John 12:31, 32).

The word “men” is italicized in your Bible, meaning that it was added by the translators but it doesn’t exist in the original Greek. Remove it, and the meaning of these verses will become clear:
The justice for sin was meant to be paid for and Christ came for that purpose to take away the sin of the world through the cross, He would be the lightning rod that took all of that judgment into His body so that men could have access into God’s presence. Praise God!
The most beautiful aspect is that AD70 when the temple came crashing down, it heralded the fact that God has now made his home in us.
“And I heard a loud voice from the throne saying, “Now the dwelling of God is with men, and he will live with them. They will be his people, and God himself will be with them and be their God.” (Revelation 21:3)
The author of Hebrews puts it this way;
“For every house is built by someone, but God is the builder of everything. 5 Moses was faithful as a servant in all God’s house, testifying to what would be said in the future. 6 But Christ is faithful as a son over God’s house. And we are his house, if we hold on to our courage and the hope of which we boast.” (Hebrews 3:4-6)

When Jesus came in the flesh and gave His life for you and me, He forever tore down that middle way of partition. He broke down all the barriers that stood between us and free access to the Father. Now, in Jesus, we are before OUR Father at anytime! It is no longer a question of coming to him again. He lives in us. What a glorious privilege! And, it is given to us because Jesus became the veil and was rent on Calvary so that we might get to God! Bless His Name! The sword plunged into him and now the way is made open for all to richly enjoy.