Skip to content
Home
Uncategorized
ANOTHER LOOK AT THE ALTAR CALL 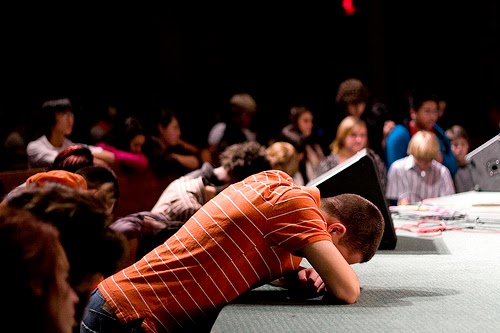 One of the most popular elements in a Christian service, revival or crusade is The Altar Call. It is basically an attempt to get people to come forward and respond to whatever ministry message was given. They come forward to give their lives to Christ and in some cases it is a platform for some others to rededicate their lives to God. What could possibly be wrong with this?
I don’t think there’s anything wrong with it other than the unhealthy methods of motivation used that lead people to guilt and condemnation in getting the expected response. People are really “guilted” into a commitment with Christ. Sometimes the message has to delivered with such dramatic eloquence and tact to draw out from the audience a feeling of unworthiness and sometimes drive them to utmost fear of death or “hell”.
When we look at the life of Jesus in his various sermons, we discover that he didn’t employ those means. How could he? Did he need to frighten people into a relationship with God. How can someone be in love with the person that they are afraid of. It is quite interesting to that it was only Jesus that attracted sinners, tax collectors, gluttons, sick and oppressed to his meetings. They really must have felt comfortable in his presence. The Jewish leaders could not because they were not good enough for God to relate with.
Your understanding of salvation and the finished work of Christ is key to successfully presenting God’s message to those lost. Christ work at Calvary was a payment for the sin of mankind. He died for all sins for all men irrespective of their morality or immorality. He took up the punishment for our sins (this includes spiritual, physical or emotional). He died to set us free from sin and its hold on us. He made available the righteousness of God which can be accessed by faith in Him. This faith puts anyone in the position to receive the atonement and walk in freedom.
So instead of telling them that death awaits them if they don’t accept your message, why not tell them the good news and let the Holy Spirit convict them of this wonderful truth. Instead of building guilt in their hearts for them to validate your message, there’s a better way to communicate the heart of the Father.
You could ask them “Have you been living in a lie that God cannot accept you because of your sins and bad behaviour?
“Have you been living your life in shame, regret and guilt over your past or failures?”,
“Do you believe that God cannot love someone like you because of the kind of person you are?”
“Do you see God as angry with you and that will want to judge you in death?”
“Are you afraid that there is no future in your life because of wrong choices you made in the past?”
The good news is the power of God to see people saved. Paul stated “the goodness of God leadeth thee to repentance” (Romans 2:4). His goodness leads men to change their minds about God. When Peter falls on his face at Jesus’ knees, saying, “Depart from me; for I am a sinful man, O Lord” (Luke 5:8), it was not after a message of hell, fire and brimstone on the sinful condition of Peter’s heart? No! It came after Jesus blessed Peter’s fishing party with so many fish that their nets broke from the load. It was Jesus’ goodness that caused Peter to repent.

The word “salvation” implies “deliverance, safety, preservation, healing and wholeness”. The good news is not to save you from an eternity in “hell” but to make you whole while you are here and in Him. Jesus promised us not only eternal life but abundant life (John 10:10). There is an expectation for us to reign in this life, now! (Romans 5:17)

It’s time to drop guilt and condemnation out of our dealings with men. It’s time to realize that we are ambassadors of the ministry of reconciliation. Our job is to present to people a Father God who was in Christ reconciling the world to them without holding a grudge against them. Let’s give them an invitation to the goodness of God revealed in Christ.