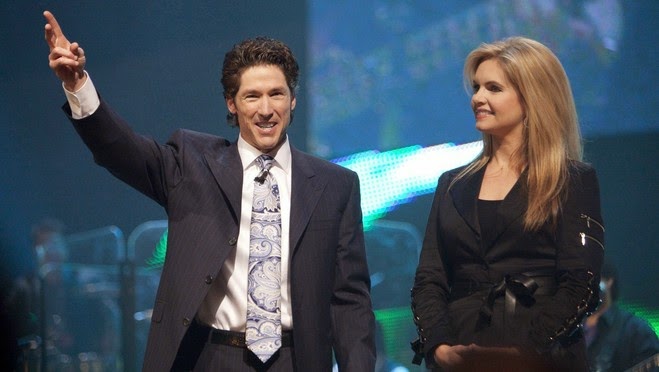 I read a letter sent to Joel Osteen online in Charisma mag by a very famous Scholar and preacher. He said he was sending it to help and correct him. After reading the letter I was praying that Joel Osteen would just turn his eyes to more important things. The letter for me was a replay of Jesus and the Pharisees.  I have inserted here an excerpt of the long letter.
“Is this your pattern of preaching and ministry? Do you rebuke in love (Prov. 27:5) as well as exhort and encourage?
Perhaps it’s time to ask yourself honestly where you fit in this warning from Paul: “For the time is coming when people will not endure sound teaching, but having itching ears they will accumulate for themselves teachers to suit their own passions, and will turn away from listening to the truth and wander off into myths” (2 Tim. 4:1-4).
Wouldn’t it be utterly heartbreaking if, on the day you stand before God, you discovered that you were one of these teachers? Wouldn’t it be tragic if your efforts were found to be wood, hay and stubble on that great and glorious Day (1 Cor. 3:11-15)? And may I ask you candidly if you even talk about that holy day of accounting?
Some Christians have referred to you and Victoria as outright heretics, others have said that you are fighting against the Holy Spirit (since the Spirit convicts the world of sin but your preaching does not), others have said that you are a pagan religionist, while others have said that your superficial message of material prosperity cannot bear the weight of the gospel.”
All the concerns he was expressing was based on how some Christians are uncomfortable with the simplicity of the gospel from Joel. They call his message an “itching-ear” message. They forget that an “itching-ear” message is one goes into myths. A myth is a traditional story, especially one concerning the early history of a people. The myths he warned them was the Jews defending their lineage in Moses. Which was any message that reminded them as natural Israel instead of the Spiritual Israel. During the last days of the Mosaic age there were people who came up with messages to still tie their Jews to the law as the identity, culture and faith.
Joel Osteen preaches Hope with the gospel and we are offended that he is not telling them to repent. So what do we say about Jesus who never preached hell to his crowd and but to the religious leaders.
His message is attractive to unbelievers not because he is interested in building TV ratings but he is following his role model.
Matthew 9:10-13
As Jesus was having a meal in Matthew’s house, many tax collectors and sinners came and ate with Jesus and his disciples.
When the Pharisees saw this they said to his disciples, “Why does your teacher eat with tax collectors and sinners?” 12 When Jesus heard this he said, “Those who are healthy don’t need a physician, but those who are sick do. 13 Go and learn what this saying means: ‘I want mercy and not sacrifice.’ For I did not come to call the righteous, but sinners.”
True repentance happens not just when people run to our pew and cry their eyes out to God. It happens when you encounter God’s goodness and unconditional love and your heart is overwhelmed by it.
Jesus stated that He came, “not to call the righteous, but sinners to repentance” (Mark 2:17). If Jesus specifically mentions that He is not calling the righteous to repent, why are we always calling on the righteous to repent? His call was to sinners, and He said it because the religious world was frustrated with His constant fellowshipping with the lost. Jesus did not become like the sinner in order to win the sinner, but He did present a different view of God to the sinner so that they would change their mind about who God was and how He thought of them.
Many sinners think that God is angry with them and that He is about to send them to hell at any moment. By conversing with and eating with sinners, Jesus was changing the perception that the sinner had of who God was. Jesus made God personable and loving, and sinners felt themselves opening up to the Son of God.
This is what every ministry in the New covenant is meant to do; to build on Jesus. We have to employ our ministry for the purpose of presenting a lovely and loving God to a lost world. That is they way to do ministry.