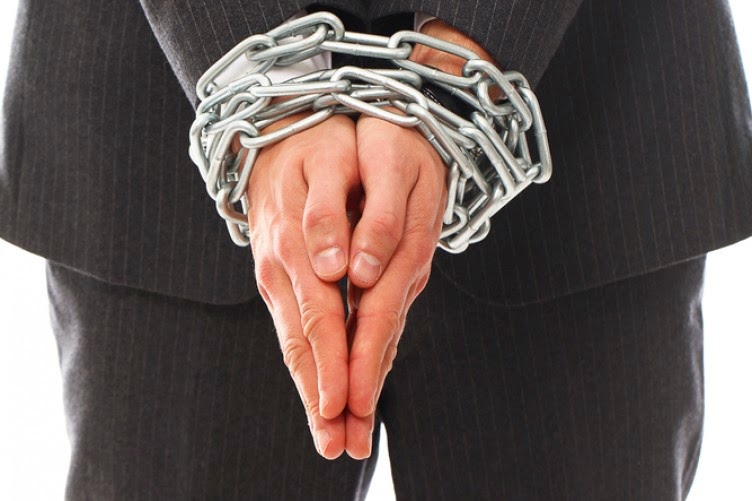 “Watch out, so that no one will take you captive by means of philosophy and empty deceit, following human tradition which accords with the elemental spirits of the world but does not accord with the Messiah.” – Colossians 2:8
The elemental spirits rule in every land and tribe. These spirits rule by the law of do good and get good, do bad and get bad. This is not the message of Christianity. The gospel says we are blessed because Jesus is good. Scriptures also calls it the beggarly elements. Paul warned us not to return to them again. The law is not only the 10 commandments but any system that requires you to perform before you can be justified. The rules and regulations of men will only enslave us. Our freedom is in the grace which came through Jesus Christ.
It was actually angels that gave the earlier Law for Israel at Mount Sinai. It was common knowledge among the Jewish people in the 1st century that the Law of God was given to Moses by angels and not directly by God himself. According to Josephus, a renown and authoritative Jewish priest/historian of the 1st century and an expert in Jewish beliefs at the time, said:

“We have learned the noblest of our doctrines and the holiest of our laws from the ANGELS sent by God.”

Even the evangelist Stephen rebuked the Jewish authorities in Jerusalem for going against the Law, he said they were those: “Who have received the Law by the disposition of ANGELS, and have not kept it” (Acts 7:53).
“What, then, was the purpose of the law? It was added because of transgressions until the Seed to whom the promise referred had come. The law was given through angels and entrusted to a mediator.” (Galatians 3:19)

In the words of Simon Yap, he stated the following about the law and its relationship with angels:
“The apostle Paul gives more information about the Law being given by angels in the Book of Colossians. Here Paul’s principal theme of the Mystery of Christ is dependent upon knowledge that angels (very powerful and influential angels) were responsible for issuing the Law to Moses. If one does not recognize what Paul was teaching regarding angelic powers giving the Law to Moses, then one remains ignorant of some of the most sublime teachings on the role of Christ in obtaining a salvation for Christians. Christ released all Christians from the bondage required by this angelic Law.
Note this: Paul stated that a very sophisticated philosophical teaching was being taught to the Colossian Gentile Christians. This teaching was trying to lead them astray from the doctrines of Christ Jesus. He spoke of it as,
“philosophy and vain deceit, after the tradition of men, after the elements [the real Greek meaning] of the world, and not after Christ.”

Now since after the cross, the law was no longer in God’ agenda. The destruction of Jerusalem in 70AD was the final stage that brought an end to the administration of angels in the conduct of human life. The Holy Spirit was sent forth so we could be guided into all truth. The problem with the Jews as noted by Paul was their rejection of the Son and His sacrifice and their adherence to the law given by angels.

The unfortunate thing we see in the world today is that every tribe is actually governed by these same elementary principles that guide conduct and human welfare. These laws are now under the enforcement of fallen angels who now use it to control and enslave men.

Many cultures in Africa have a system where the people’s performance will determine the favour of the gods. Their lands will be cursed because of their non-performance or offence. They would have to perform sacrifices to redeem themselves or their land. That’s sounds like the Jews right?
The truth is that these fallen spirits have been using the law to condemn men and bring people to guilt, making them believe that God cannot do anything for them. So the Devil and his co-horts have used the law to rob men of God’s blessings. Romans 8:3 “For what the law was powerless to do because it was weakened by the flesh, God did by sending his own Son in the likeness of sinful flesh to be a sin offering”

They know that man can never be perfect in the flesh but yet challenge them to keep it and at the same time fill them with more than enough pressure though lust for them to fail.
Jesus’ death brought about a significant change in the system of things. He had to strip these spirits of their power and the cross was the solution. Let us see Colossians 2:14-15
“ having wiped out the handwriting of requirements that was against us, which was contrary to us. And He has taken it out of the way, having nailed it to the cross. 15 Having disarmed principalities and powers, He made a public spectacle of them, triumphing over them in it.” (KJV)
Now lets see from two other translations:
“ We had broken the Law many ways. Those sins were held against us by the Law. That Law had writings which said we were sinners. But now He has destroyed that writing by nailing it to the cross. 15 God took away the power of the leaders of this world and the powers of darkness. He showed them to the world. The battle was won over them through Christ.” (NIV)
“ He wiped away the bill of charges against us. Because of the regulations, it stood as a testimony against us; but he removed it by nailing it to the execution-stake. 15 Stripping the rulers and authorities of their power, he made a public spectacle of them, triumphing over them by means of the stake”. (Complete Jewish Bible)

These spirits have been disarmed so that they could no longer inflict judgment, condemnation and guilt on you. These things are the reasons many are sick, poor, depressed and dejected.

“Stand fast therefore in the liberty by which Christ has made us free,[a] and do not be entangled again with a yoke of bondage.” (Galatians 5:1)

Now look at the following verses:
“2 Indeed I, Paul, say to you that if you become circumcised, Christ will profit you nothing. 3 And I testify again to every man who becomes circumcised that he is a debtor to keep the whole law. 4 You have become estranged from Christ, you who attempt to be justified by law; you have fallen from grace.”

Don’t get your trapped into a system or religion that seeks justification your righteous deeds. Find your acceptance in The Beloved, Jesus. As a son of God you are already accepted and justified in Him. This means that you qualify for the blessings anything without any special performance from you. You can expect it because God is good to you.

There are many today who have been told that God is not pleased with them so they have improve on their spiritual ratings to receive more from God. Such teachings only create further separation in the hearts of the people from the loving father.

Jesus took away every right that the devil had to accuse you. There is no charge against you because you have been justified by the father in the one offering of Jesus. Don’t get yourself entangled again the yoke of the law. Remain standing in the liberty wherewith Christ has set us free.