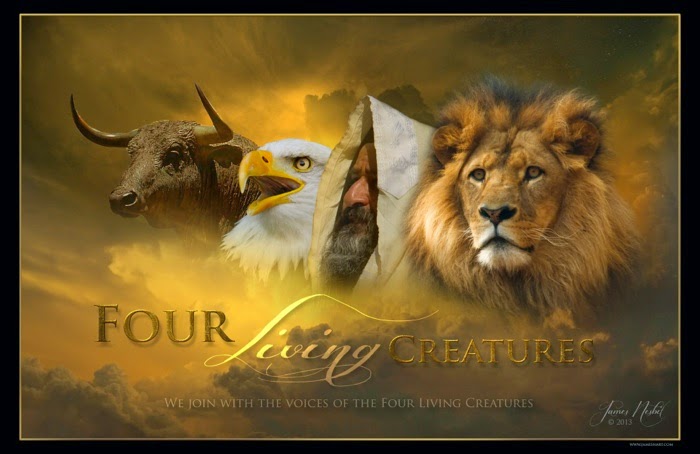 “and in front of the throne was something like a sea of glass, like crystal. In the middle of the throne and around the throne were four living creatures full of eyes in front and in back.
7 The first living creature was like a lion, the second creature like an ox, the third creature had a face like a man’s, and the fourth creature looked like an eagle flying.”
– Revelation 4:6-7
These 4 living creatures that John saw have been a mystery to many. Are they really creatures or they do they speak of something?
We must remember that the things John saw were shown in signs to him. A sign is the actual thing but it points to something. The book of Revelation as well as other has its main theme in Jesus. It is the revelation of Jesus and not about scary events and catastrophe.
John saw in heaven a lamb sitting on the throne. No one one would argue that the lamb he saw was Jesus. So these living creatures must also signify Jesus too.
When the Jews camped in the wilderness after leaving Egypt, they were instructed to set up in 4 sub-camps, one for each point of the compass with the tabernacle in the center. The first was called the Camp of Judah and included Issachar and Zebulon. The ensign of the Judah camp was a flag with a large lion embroidered on it, to locate their campground. It was located east of the tabernacle.
The second camp was named after Ephraim and included Manasseh and Benjamin.  It was sited opposite the camp of Judah to the west of the tabernacle. Ephraim’s flag depicted the figure of an ox.
The third camp was headed by Reuben and included Simeon and Gad. Reuben’s flag showed the face of a man. It was located south of the tabernacle.
The fourth camp was that of Dan with Asher and Napthali included and was located in the North. Dan’s flag pictured a large eagle.
If you looked at the camp of Israel from a mountain top you would see the tabernacle in the Center and the 4 sub-camps around it. The large flag waving in the East pictured the Lion, and opposite it in the West was the Ox. To the south was the face of a Man and in the North was the Eagle.
It was a picture of God’s throne in heaven on earth. The tabernacle represented God’s throne in the center, the four flags representing the four faces of the cherubim and the four sub-camps extending along the four points of the compass formed a cross. 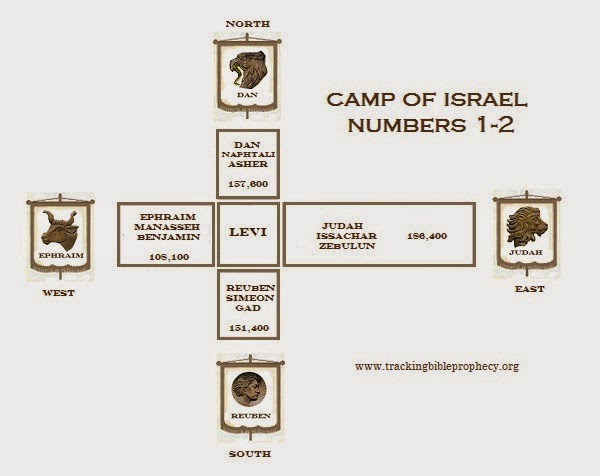 These four emblems speak of Jesus. They are symbols pointing to him in person and personality. They each unveil Jesus differently to give us robust view of our Lord.

The four living creatures are pictures and revelation of Jesus from the four gospels.

The Lion for Matthew, the Ox for Mark, the Man for Luke, and the Eagle for John.  Based on the shadow of the Old testament, the tabernacle is seen as a model of Jesus, at the center of the four gospels.
First we need to appreciate the fact that none of them was written solely to provide an accurate historical account of the life of Jesus. Each is directed at a specific audience with events portrayed in such a way as to be meaningful to that audience. The role of Jesus, the use of certain phrases, the inclusion or exclusion of events, and the emphasis on first and last miracles are all meant to underscore the point of the particular gospel in question.
Lets see
Matthew  – The Lion
Matthew was written to the Jews. His purpose was to demonstrate who Jesus was and presented overwhelming evidence that Jesus was Israel’s long awaited Messiah: The Lion of Judah, the King of Israel. The genealogy in Matthew begins with Abraham and runs through King David (Matt 1:1-17). Every king must have a lineage to prove his place on the throne. The most frequently used phrase in Matthew’s Gospel is “it was fulfilled.” We also find the phrase “kingdom of heaven” used most often in this book than the other gospels. The first miracle in Matthew, the cleansing of a leper, was highly symbolic for Israel. Leprosy was viewed as a punishment for sin, and cleansing a leper signified taking away the sin of the nation. Matthew’s gospel ends with the resurrection signifying God’s promise that David’s Kingdom would last forever. His kingdom has been established on the earth and it will keep expanding until it takes over the whole earth.
Mark – The Ox
This gospel was written to the Romans. It portrays Jesus as the obedient servant of God. Since no one cares about the heritage of a servant there is no genealogy in Mark. The most frequently used phrase in Mark’s Gospel is “straight away” sometimes translated immediately, it gives us picture after picture of Jesus in action as a tireless worker. Mark’s gospel ends with the ascension, signifying that the servant’s job was finished and He was returning home. Jesus still serves as High priest for us in heaven. This is a ministry makes the new covenant operative.
Luke – The Man
Luke’s account gives us the humanity of Jesus. It portrays Jesus as the Son of Man, a title Jesus often used of Himself, and was written to the Greeks. The genealogy of Jesus in this gospel was from his mother’s line and ended with Adam, the first man (Luke 3:21-38).
This gospel was written to the Greeks. Greeks were famous for their story telling form of oratory, so the most frequent phrase in Luke is “and it came to pass.” Most movies of the life of Jesus take to Luke’s gospel because of its flowing narrative form. Since the Greeks, like the Romans, were a polytheistic society, Luke used the casting out of a demon as his first miracle, and ended his gospel with the promise of the Holy Spirit, uniting man with God. It was a man that defeated the devil for all men and it is a man that sits in heaven advocate and mediator.
John – The eagle
John was written to the church revealing divinity in Jesus. Straight away he starts proving that creation began through Him who was known as the word. The eagle is the one who descended from heaven. His gospel is the most unique, based upon 7 miracles, 7 “I Am” statements that proves He was God and 7 discourses. The uses of 7s indicates completeness. As Paul said in Collosians 2:9 “For in Him dwelleth  all the fulness  of the Godhead bodily.
John pays little attention to chronology, sometimes placing events out of order (like the Temple Cleansing in Chapter 2) It is believed that John’s gospel covers only about 21 days out of the Lord’s 3 1/2 year ministry. His genealogy begins before time and identifies Jesus as the Eternal One Who was with God and Who was God  (John 1:1-2). The most frequently used phrase in John is “Verily, verily”, or truly, truly. His first miracle was changing water into wine, a true picture of the new covenant as He “revealed His Glory and His disciples put their faith in Him” (John 2:11).  John’s Gospel ends with the promise of the 2nd Coming. The fulfillment was to carry out the days of vengeance upon apostate Israel and put an end to the Mosaic economy and universe. This was fulfilled in AD70 and thus he established a new world for the eternal one to tabernacle in the hearts of men and not in temples made with man’s hands.
In Chapter 5 of Revelation we see John weeping because no one was found worthy to open the seal of the new covenant. One of the elders stopped him and showed him the lamb which was a picture of Jesus that had prevailed to open the scroll and seven seals.
Next we find them sing a new song in heaven as a result of the finished work of the lamb, Jesus.
“You are worthy to take the scroll
and to open its seals
because you were killed,
and at the cost of your own blood you have purchased for God
persons from every tribe, language, people, and nation.
10 ​​​​​​​You have appointed them as a kingdom and priests to serve our God, and they will reign on the earth.”
The four living creatures ended the song by saying “Amen”. Jesus introduced himself in the same book as The Amen. The gospels endorsed the new covenant because Jesus endorsed the blessings of the new covenant over your life. The believer has all to his favour because the scriptures reveal Jesus who is the fullness of grace and truth. The four living creatures all reveal the glory and beauty of our Lord Jesus Christ.