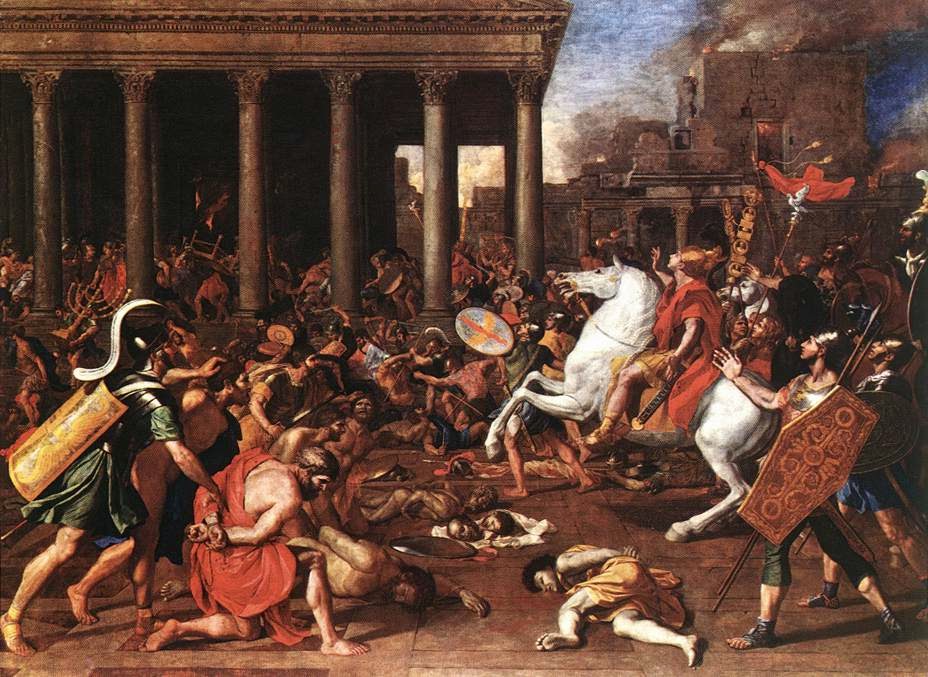 1 And I saw another sign in heaven, great and marvellous, seven angels having the seven last plagues; for in them is filled up the wrath of God.

3 And they sing the song of Moses the servant of God, and the song of the Lamb, saying, Great and marvellous are thy works, Lord God Almighty; just and true are thy ways, thou King of saints.

5 And after that I looked, and, behold, the temple of the tabernacle of the testimony in heaven was opened:

6 And the seven angels came out of the temple, having the seven plagues, clothed in pure and white linen, and having their breasts girded with golden girdles.

7 And one of the four beasts gave unto the seven angels seven golden vials full of the wrath of God, who liveth for ever and ever.

8 And the temple was filled with smoke from the glory of God, and from his power; and no man was able to enter into the temple, till the seven plagues of the seven angels were fulfilled.
–      Revelation 15:1,3,5-8

Many people have argued over the interpretation of the book of Revelation. They are seeing this display of wrath for the future and they cannot reconcile with the finished work of Jesus and introduction of the new covenant.

The book of Revelation is actually John’s Olivet discourse which gives us the Lord’s prophecy about the destruction of Jerusalem and the temple. Matthew 24 gives us Jesus longest prophecy concerning the same matter. He said it will be like the days of Noah. Everyone knows that in Noah’s day that God’s judgment was manifested upon the generation and remnant was saved.

In the records of the Jewish war during the first century Josephus mentions that 1.1 million people were killed during the siege, of which a majority were Jewish, and that 97,000 were captured and enslaved, including Simon bar Giora and John of Giscala.

“The slaughter within was even more dreadful than the spectacle from without. Men and women, old and young, insurgents and priests, those who fought and those who entreated mercy, were hewn down in indiscriminate carnage. The number of the slain exceeded that of the slayers. The legionaries had to clamber over heaps of dead to carry on the work of extermination.”

Many fled to areas around the Mediterranean. Titus reportedly refused to accept a wreath of victory, saying that the victory did not come through his own efforts but that he had merely served as an instrument of God’s wrath.

Did God use Titus to carry out his wrath upon that generation of that time. Yes He did. This is exactly like he did when He used Nebuchadnezzar to bring judgment upon Israel in 586 BC when they were led into captivity in Babylon. Interestingly the destruction of Jerusalem in 70AD happened on the same day as of the first.

Flavius Philostratus in his book, The Life of Apollonius wrote the following:

“After [Vespasian’s son] Titus had taken Jerusalem, and when the country all round was filled with corpses, the neighboring races offered him a crown; but he disclaimed any such honor to himself, saying that it was not himself that had accomplished this exploit, but that he had merely lent his arms to God, who had so manifested his wrath; and Apollonius praised his action, for therein he displayed a great deal of judgment and understanding of things human and divine, and it showed great moderation on his part that he refused to be crowned because he had shed blood. Accordingly Apollonius indited to him a letter which he sent by the hands of Damis and of which the text was as follows:
Apollonius sends greetings to Titus the Roman general.

Whereas you have refused to be proclaimed for success in war and for shedding the blood of your enemies, I myself assign to you the crown of temperance and moderation, because you thoroughly understand what deeds really merit a crown. Farewell.

Now Titus was overjoyed with this epistle, and replied:
In my own behalf I thank you, no less then  in behalf of my father, and I will not forget your kindness; for although I have captured Jerusalem, you have captured me.”

The plagues were poured out on a generation within the space of 42 months until the final consummation in 70AD. Israel were protected against the plagues in Egpyt because they were under the Abrahamic covenant and the shed blood of the lamb which ensured that they were spared. But in 70AD they were uncovered because they refused to enter covenant with God through the shed of the lamb of God, Jesus Christ. As the writer of Hebrews said in Hebrews 6:18

18 That by two immutable things, in which it was impossible for God to lie, we might have a strong consolation, who have fled for refuge to lay hold upon the hope set before us:

Jesus expressed the heart of God in his cry for them knowing that they were rejecting God’s new covenant that was to grant them salvation and deliver them from the coming wrath.

O Jerusalem, Jerusalem, thou that killest the prophets, and stonest them which are sent unto thee, how often would I have gathered thy children together, even as a hen gathereth her chickens under her wings, and ye would not! – Matthew 23:37

The wrath of God was exhausted on the generation because it represented a system and world that he had abandoned because He had set up a new one. This world is governed by the kingdom of His son. A new heaven and earth where He is the light that shines and darkness cannot comprehend it. Darkness cannot comprehend grace. We the sons have nothing to fear because all of our judgment have been exhausted in Jesus and the wrath has manifested in the removing of that which stood as wall of separation.