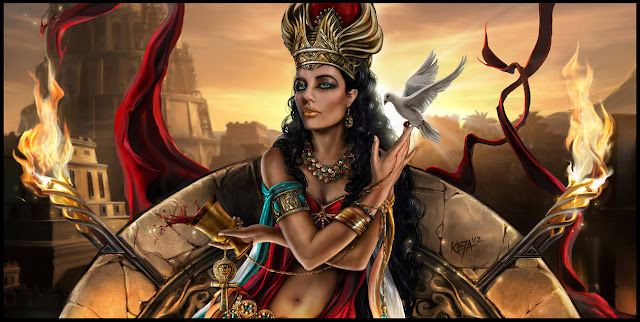 God was married to Israel at the foot of the Mount Sinai. It was a marriage that was based on vows that only one party could keep perfectly.  God gave the bride the contract or agreement for the marriage. This consisted of the Ten Commandments, the statutes and the judgments.
Isaiah 54:5 “For your Maker is your husband, YHVH of hosts is His name; And your Redeemer is the Holy One of Israel; He is called the God of the whole earth.”
God demonstrated his divorce of the House of Israel in the book of Hosea. Even amidst all punishment that the house of Israel went through you can see that there were unconditional promises that God made to them for their future. They were to be fulfilled in a marriage in Christ.
Their harlotry got them to lose their land and temple to the Babylonians. A similar but yet greater one was to be fulfilled after the establishment of the new testament.
So in the book of Revelation we find a Babylon being described. The Babylon was a prophetic name for a city whose relevance is in the entire book.
There is clear proof that the designation of Babylon as the “harlot” was Old Covenant Jerusalem or National Israel. The Scriptures describes, a harlot was not simply an immoral woman. She was a wife that had become unfaithful.
“For their mother has played the harlot;
She who conceived them has behaved shamefully.
For she said, ‘I will go after my lovers,
Who give me my bread and my water,
My wool and my linen,
My oil and my drink.’ (Hose 2:5)
“And I said to her, “You shall stay with me many days; you shall not play the harlot, nor shall you have a man—so, too, will I be toward you.” (Hosea 3:3)
“Babylon,” the harlot, was a wife that had become unfaithful. Only Jerusalem was ever married to Jehovah and committed the dreadful crimes listed in Revelation which brought on her the bowls of wrath.
“How the faithful city has become a harlot! It was full of justice;
Righteousness lodged in it, But now murderers.” (Isaiah 1:21)
“29 “Woe to you, scribes and Pharisees, hypocrites! Because you build the tombs of the prophets and adorn the monuments of the righteous, 30 and say, ‘If we had lived in the days of our fathers, we would not have been partakers with them in the blood of the prophets.’
31 “Therefore you are witnesses against yourselves that you are sons of those who murdered the prophets. 32 Fill up, then, the measure of your fathers’ guilt.”(Matthew 23:29-31)
Revelation gives her identity, the indictment against her and her final destruction.
“And their dead bodies will lie in the street of the great city which spiritually is called Sodom and Egypt, where also our Lord was crucified.” (Revelation 11:8)
“And another angel followed, saying, “Babylon is fallen, is fallen, that great city, because she has made all nations drink of the wine of the wrath of her fornication.” (Revelation 14:8)
“Then one of the seven angels who had the seven bowls came and talked with me, saying to me, “Come, I will show you the judgment of the great harlot who sits on many waters,” (Revelation 17:1)
“And he cried mightily with a loud voice, saying, “Babylon the great is fallen, is fallen, and has become a dwelling place of demons, a prison for every foul spirit, and a cage for every unclean and hated bird! 3 For all the nations have drunk of the wine of the wrath of her fornication, the kings of the earth have committed fornication with her, and the merchants of the earth have become rich through the abundance of her luxury.” (Revelation 18:2,3)
“Then a mighty angel took up a stone like a great millstone and threw it into the sea, saying, “Thus with violence the great city Babylon shall be thrown down, and shall not be found anymore.” (Revelation 18:21)
“And in her (Babylon) was found the blood of prophets, and of saints, and of all that were slain upon the earth.” (Revelation 18:24)
Here is another solid indication of who is that great city Babylon (the harlot / whorish woman).  She was held responsible for the blood of prophets, saints and of all that were slain upon the earth.
Jesus while speaking to the scribes and Pharisees foretold that the unfaithful and rebellious Jerusalem would be held accountable for the righteous blood of God’s prophets in Matthew 23.
The woman (“spiritual” Babylon, the great city, the great whore, Jerusalem) had become drunk with the blood of God’s faithful servants.  She was guilty of the murdering God’s prophets (Rev. 18:24) and apostles (Rev. 18:20).  Jesus states that all prophets perish in Jerusalem (Luke 13:33).  God avenged their blood upon her (Rev. 18:20; 19:2).  In addition, many prophets long ago warned of how Israel/Jerusalem as a faithful city would become a harlot through spiritual fornication (Is. 1:21; Jer. 3:6-8; Ez. 16:1-39).

The Babylon in Revelation is not the Roman Catholic Church nor is it The United States of America. God’s wrath will not be poured out on the US because of homosexuality. The Babylon in question being the Old Jerusalem has already witnessed the unleashing of divine wrath. It has been exhausted and it is not being stored up in the future.