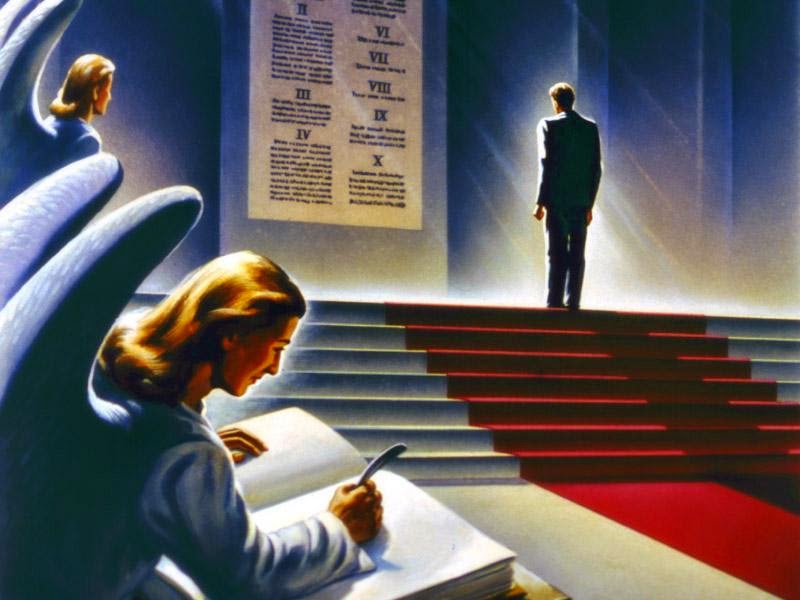 I remember when I was in Secondary School, I read a tract titled This Was Your Life. I received from the Christian fellowship in the school. In that tract, it said that on the last day God will replay your entire life, including all your sins, on a huge video screen for all the angels and the whole to watch! So we could expect God replay those moments when committed some secret sins and also major ones.
So in order to let someone watch my secret sin all I needed to do was not commit one. What a measure! I was so conscious of so many moments in my life and was trying hard not sin because I didn’t want anyone to see on that day and call me a hypocrite. And at so many points I was down because I failed and imagining people see that my Christianity was not up to notch as I presented.
The whole idea of my sins being screened in heaven made me feel so awful and condemned before God that even sometimes in church I didn’t feel qualified to worship Him. I would hear within me “you think He has forgotten that sin, don’t bother worshipping Him because He cannot behold sin and you” I lost the boldness to stand before God on so many occasions.
At least now I know why some people cry doing worship. Its not because of the glory of his beauty that they behold but they see themselves to stand before who is all Holy. Their worship compares their ugliness to the beauty of His holiness.
Within I knew I was a mess. I was actually messed up with some bad theology, thinking about all my sins that God was recording down, until I read I discovered the New covenant. You see all the while, I didn’t really the difference in the covenants. I was mixing both because I felt the Bible meant so.
Then one glorious day through balanced preaching someone preaching on the reality of the new covenant declared Hebrews 10:16-17
“This is the covenant that I will make with them after those days, says the Lord: I will put My laws into their hearts, and in their minds I will write them,”[c] 17 then He adds, “Their sins and their lawless deeds I will remember no more.”
Some of the words jumped out:
This is the covenant that I will make. Clearly God was pointing out another covenant even when one was existing when He made the promise. Every covenant must have its own terms and conditions. I saw it and saw something different.
This new covenant was filled with the “I wills” of God. This is against the backdrop of the Old covenant of the “You shalls” of man.
There it was. God said “Their sins and their lawless deeds I will remember no more”
My God, I couldn’t believe it was in the Bible.  Then I saw another bombshell in Romans 4:8:
“Blessed is the man to whom the Lord shall not impute sin.”
Hallelujah! I felt like Elizabeth (the baby in my womb leapt for joy) Whenever the truth of the new covenant is revealed to us, the Holy Spirit gets excited.
What! God was not counting my sins against. He will not remember them again.
Someone may ask how can God forget sins when I still remember?
Two reasons:
Firstly God is not man. His ways are not our ways.
Secondly God does not impute any of our sins to us is that He has already imputed all of them to the body of His Son Jesus when He hung on the cross 2,000 years ago. He did not commit sin but became sin for us so that we could become His righteousness (2 Corinthians 5:21)
It doesn’t end there, when God punished His Son for our sins, He caused the curse of the law to fall stroke by stroke upon Jesus’ entire body until every curse had been fully satisfied. That is why we have been redeemed from the curse of the law. (Galatians 3:13) That is why, instead of imputing sin to us, God imputes righteousness!
When it says in vs 17 “that our sins and lawless deeds He will remember no more”. The words “no more” in the original Greek text carry a strong double-negative meaning. In other words, God is saying, “No way, by no means, will I ever remember your sins again!” This is a double assurance that God is giving us so that we can free of guilt and condemnation.
Beloved, since God says that He will remember your sins no more, why do you still remember them? You have to be like your father. The same applies for that matter, your spouse’s or neighbor’s sins? God does not want you to be conscious of sins because He is not. So rejoice and live the abundant life He died to give you! Come to Him boldly and expect Him to show you mercy and grace because He remembers your sins no more!