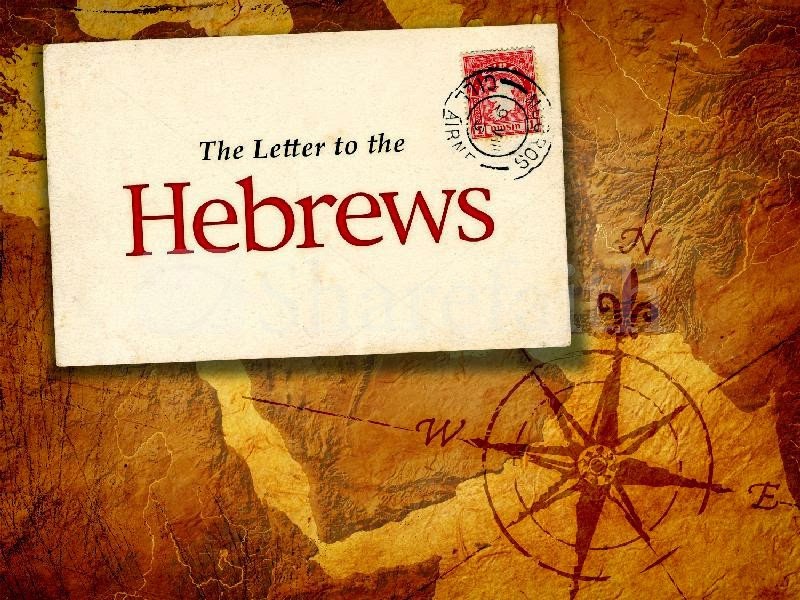 Hebews 1 begins the journey to the end.

1 God, who at sundry times and in divers manners spake in time past unto the fathers by the prophets,
2 Hath in these last days spoken unto us by his Son, whom he hath appointed heir of all things, by whom also he made the worlds;

His kingdom is to reign forever and forever and not come to an end at an age. The last day here is the “last days” of the Judaic “world” or “age” (compare Hebrews 2:5; 6:5, e.g.). This was the age that the prophets was the voice of the Father and at the last days God sent His Son to be His voice to announce a new age that will be ushered in by Kingdom of God.
In chapter 2, verse 5, it says, “for not to angels subjected he the about to come inhabited (earth), about which we speak.” Oikoumeneen is accusative singular of oikoumenee, “the habitable earth, world,” which was about to come in the Hebrew epistle at the fall of Jerusalem in AD 70. This “habitable world or earth” was the new earth which Jesus promised in His Beatitudes would be inherited by the meek (Matthew 5:5). There were two “habitable earths” during the first-century generation of transition at the time of the writing of the letters and epistles by Paul, Peter and John; one was about to come as in this Hebrews 2;5, and the other was the Jewish “habitable earth” which was about to experience an hour of trial as noted in Revelation 3:9,10.
9 Behold, I will make them of the synagogue of Satan, which say they are Jews, and are not, but do lie; behold, I will make them to come and worship before thy feet, and to know that I have loved thee.
10 Because thou hast kept the word of my patience, I also will keep thee from the hour of temptation, which shall come upon all the world, to try them that dwell upon the earth.

The synagogue of Satan is exactly what the temple had become since God left it. Those who worship there still see themselves as Jews but are not regarded so by God. It is only those who are of faith that are seen as Jew. Those are “the ones dwelling on the earth,” as seen in3:10b.

In chapter 4 the writer emphasizes about the “sabbath rest”. The message was that there was remaining  a Sabbath rest for God’s people, the “remaining” implying that another “temporary” rest that had been going on would no longer remain in the end time of Bible prophecy.

1 Let us therefore fear, lest, a promise being left us of entering into his rest, any of you should seem to come short of it.
2 For unto us was the gospel preached, as well as unto them: but the word preached did not profit them, not being mixed with faith in them that heard it.
3 For we which have believed do enter into rest, as he said, As I have sworn in my wrath, if they shall enter into my rest: although the works were finished from the foundation of the world.
6 Seeing therefore it remaineth that some must enter therein, and they to whom it was first preached entered not in because of unbelief:
9 There remaineth therefore a rest to the people of God.
10 For he that is entered into his rest, he also hath ceased from his own works, as God did from his.
11 Let us labour therefore to enter into that rest, lest any man fall after the same example of unbelief.

This was still a warning to his fellow Jews so that they could transit into the true rest of God and not perish in the upcoming destruction upon the land.

Hebrews 6:1-6
6 Therefore leaving the principles of the doctrine of Christ, let us go on unto perfection; not laying again the foundation of repentance from dead works, and of faith toward God,
4 For it is impossible for those who were once enlightened, and have tasted of the heavenly gift, and were made partakers of the Holy Ghost,
5 And have tasted the good word of God, and the powers of the world to come,
6 If they shall fall away, to renew them again unto repentance; seeing they crucify to themselves the Son of God afresh, and put him to an open shame.

The author was encouraging them to transit from following the requirements of the law and ritualistic processes to embrace Jesus. Their rejection would mean that the death of Jesus was in vain. It meant nothing to them. That was their condemnation.
Through faith and patience they would inherit (they were “inheriting” at the time of the writing of Hebrews as the participle shows in Hebrews 6 :11,12-) the blessings of the new things, the good things

7 He that overcometh shall inherit all things; and I will be his God, and he shall be my son. Revelation 21:7

Hebrews 9 27,28 says
“And as it is appointed unto men once to die, but after this the judgment:
28 So Christ was once offered to bear the sins of many; and unto them that look for him shall he appear the second time without sin unto salvation.

Death and judgment are set in this chapter, and since Christ, having been offered to bear the sins of many, lives, He would appear  a second [time] without sin to them who would be expecting Him for salvation (9:28). The salvation they would inherit was connected with Christ’s return in the midst of their persecution. The saints were about to inherit salvation in. This salvation was deliverance from their oppression.

Hebrews 1:14.
The law was a shadow of the about-to-come good things of 10:1. Salvation was promised at the fall of Jerusalem (Luke 21:28-32)
28 And when these things begin to come to pass, then look up, and lift up your heads; for your redemption draweth nigh.
29 And he spake to them a parable; Behold the fig tree, and all the trees;
30 When they now shoot forth, ye see and know of your own selves that summer is now nigh at hand.
31 So likewise ye, when ye see these things come to pass, know ye that the kingdom of God is nigh at hand.

Jesus’ words in the context of the end of the Jewish age was, “in your patience you will gain your souls,” Luke 21:19).

In Hebrews 10
26 For if we sin wilfully after that we have received the knowledge of the truth, there remaineth no more sacrifice for sins,
27 But a certain fearful looking for of judgment and fiery indignation, which shall devour the adversaries.
28 He that despised Moses’ law died without mercy under two or three witnesses:
29 Of how much sorer punishment, suppose ye, shall he be thought worthy, who hath trodden under foot the Son of God, and hath counted the blood of the covenant, wherewith he was sanctified, an unholy thing, and hath done despite unto the Spirit of grace?
30 For we know him that hath said, Vengeance belongeth unto me, I will recompense, saith the Lord. And again, The Lord shall judge his people.

The summary is this. The willful sin is the rejecting the sacrifice of jesus for their sins. There remains no more sacrifice because Jesus’ was the ultimate and final that God required. So the Lord’s judgment was coming on his people if they rejected his plan of salvation.

J. Stuart Russell writes, “the annihilation of the Jewish nationality therefore removed the most formidable antagonist of the gospel and brought rest and relief to suffering Christians.” It is ironic that the prime example of martyrdom under Jewish persecution was reported as teaching the destruction of the temple. When Stephen, one of the first deacons of the early church, began his ministry, the Synagogue of the Freedmen “set up false witnesses who said, “This man does not cease to speak blasphemous words against this holy place and the law; for we have heard him say that this Jesus of Nazareth will destroy this place and change the customs which Moses delivered to us” (Acts 6:13f). Stephen was later stoned to death by an angry mob who rejected his preaching of the gospel.”

According to Hebrews 7:12
12 For the priesthood being changed, there is made of necessity a change also of the law.

The priestly office in 62 AD as at when the book was written was “being changed”. The high priests were still daily ministering and offering the same sacrifices at this same time, so Judaism had not ceased to exist–the fashion of the Jewish age was passing away in that generation, but at 62 AD had not passed away yet!

And they that use this world, as not abusing it: for the fashion of this world passeth away. 1 Corinthians 7:31;

The Old Testament faithful had not obtained the blessings of the promise God made to Abraham (Genesis 12:1-3), as the writer of Hebrews said “God having forseen something better concerning us, in order that not without us they should be perfected” (Hebrews 11:39,40). With their great exploits of faith, they still fell short because the kingdom did not arrive their lifetime. Perfection is only obtainable in the new covenant.

This new covenant believers had something different and unique. Unlike the Jews in the Old testament, they had then approached Mount Zion, the heavenly Jerusalem, had been enrolled in the heavens, and so they were not to refuse Him who warned them of the shaken things being removed so the not-shaken things would remain (12:22ff.). They were receiving an unshakable kingdom  so in light of that fact, they were to have grace, through which they could serve God pleasingly, and this with devoutness and awe

28 Wherefore we receiving a kingdom which cannot be moved, let us have grace, whereby we may serve God acceptably with reverence and godly fear:
Hebrews 12:28,

They no longer had a continuing city, but they anticipated the about-to-come city they sought which was their consolation in their tribulations.

13 Let us go forth therefore unto him without the camp, bearing his reproach.
14 For here have we no continuing city, but we seek one to come.
Hebrews 13:14

John saw it come down out of heaven (Revelation 21:2).
2 And I John saw the holy city, new Jerusalem, coming down from God out of heaven, prepared as a bride adorned for her husband.

It was and is the “capital” of the Israel of God (Galatians 6:15,16).
15 For in Christ Jesus neither circumcision availeth any thing, nor uncircumcision, but a new creature.
16 And as many as walk according to this rule, peace be on them, and mercy, and upon the Israel of God.

20 Now the God of peace, that brought again from the dead our Lord Jesus, that great shepherd of the sheep, through the blood of the everlasting covenant,
21 Make you perfect in every good work to do his will, working in you that which is wellpleasing in his sight, through Jesus Christ; to whom be glory for ever and ever. Amen.
22 And I beseech you, brethren, suffer the word of exhortation: for I have written a letter unto you in few words. – Hebrews 13:20-22

What a comprehensive look at the times they were in, their transition of the old covenant, the warning to Apostate nation and the hope of the kingdom to be established in the last days of the Mosaic age.