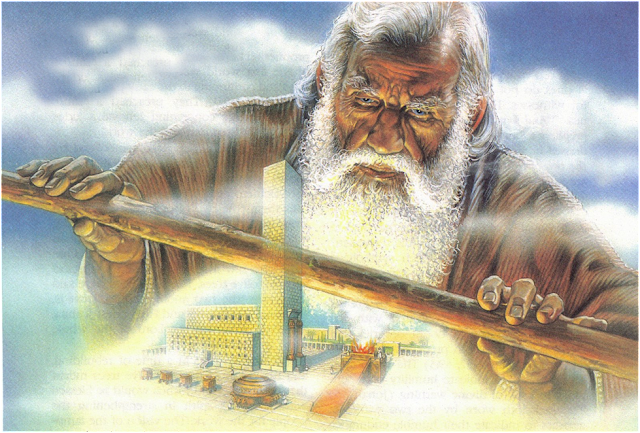 There has been heated debates here and there about the dating of the book of Revelation. The written text of the book of Revelation provides a self-witness for the date it was written. One of such is when John was told to measure the temple.
Then there was given me a measuring rod like a staff; and someone said, “Get up and measure the temple of God and the altar, and those who worship in it. 2″Leave out the court which is outside the temple and do not measure it, for it has been given to the nations; and they will tread under foot the holy city for forty-two months.
(Revelation 11:1-2 NASB)
These verses refer to a temple standing in a city called the “holy city”. Based upon Hebrew Scriptures, we can surmise that a Christian Jew such as John would have had the historical Jerusalem in mind when he spoke of the holy city.
Awake, awake, Clothe yourself in your strength, O Zion; Clothe yourself in your beautiful garments, O Jerusalem, the holy city; For the uncircumcised and the unclean Will no longer come into you. (Isaiah 52:1 NASB)
Now the leaders of the people lived in Jerusalem, but the rest of the people cast lots to bring one out of ten to live in Jerusalem, the holy city, while nine-tenths remained in the other cities. (Nehemiah 11:1 NASB)
According to Revelation 11:2 it was to be under attack for 42 months. History has it that Nero commissioned Flavian Vespasian, a Roman general, to engage Israel in war in February A.D. 67. He actually entered the Promised Land and engaged in battle that spring so that the Jewish war with Rome lasted from spring A.D. 67 until the temple fell in August A.D. 70, forty-two months later.
Luke 21:20 contains Jesus’ prophecy regarding the destruction of the temple:
“But when you see Jerusalem surrounded by armies, then recognize that her desolation is near. (Luke 21:20 NASB)
There is no event after 70ad that matches this description and event to support a late date.
Why was he required to measure the temple? The act of measuring functions as a symbol just as most of the book of Revelation involves, but of what? Measuring could signify something positive (usually: protection) for the measured part or could stand for something with an evidently negative outcome.  It all depends on the context.
In Lamentations 2:7–8a, for instance, we find:
‘The Lord has scorned his altar, disowned his sanctuary; he has delivered into the hand of the enemy the walls of her palaces . . . the Lord determined to lay in ruins the wall of daughter Zion; he stretched the line; he did not withhold his hand from destroying’.
2 Kings 21.13 gives a similar imagery:
‘I will stretch over Jerusalem the measuring line for Samaria, and the plummet for the house of Ahab; I will wipe Jerusalem as one wipes a dish, wiping it and turning it upside down’.
The similarity between measurement and judgment is confirmed by the parallel use of both concepts in Matt 7.2:
‘for with the judgment that you judge you will be judged, and with the measure that you measure you will be measured’ This expression is also common in early Rabbinic literature.
What happened at 70ad was a judgment that befell a nation.
Peter said in 1 Peter
“For the time has come for judgment to begin at the house of God; and if it begins with us first, what will be the end of those who do not obey the gospel of God?”
Peter indicated that time had come and not that it will in 2,000 years. In Matthew 23:29-39 Jesus said that the judgment coming on Jerusalem in his generation.  He stood in the Temple and rebuked the Jewish leadership saying they were the children of those who had killed the prophets, and that they would kill the messengers he would send them. He said that in so doing they too would participate in their fathers’ sin and would “fill up the measure of your fathers’ guilt.”
Jesus said that as a result of this coming persecution, judgment for all of the blood of all the martyrs all the way back to creation would come in his generation (v. 32-36), and that judgment would be targeted at Jerusalem.
Now look at what Jesus said that correlates with John’s vision in Luke 19:41-45
“41 Now when Jesus approached and saw the city, he wept over it, 42 saying, “If you had only known on this day, even you, the things that make for peace! But now they are hidden from your eyes. 43 For the days will come upon you when your enemies will build an embankment against you and surround you and close in on you from every side. 44 They will demolish you – you and your children within your walls – and they will not leave within you one stone on top of another, because you did not recognize the time of your visitation from God.”
The measurement was symbolic of the perimeter of the destruction that included the destruction of the temple in Israel in 70ad. Jesus also through prophetic language in Matthew 23 said in vs 38 “Look, your house is left to you desolate!”

The measuring of the temple was a confirmation of the judgment about to hit the land and temple. That judgment is behind us and there is no promise of a rebuilt 3rd temple. God is now tabernacled in the believer and as Paul said we are the temples of God.