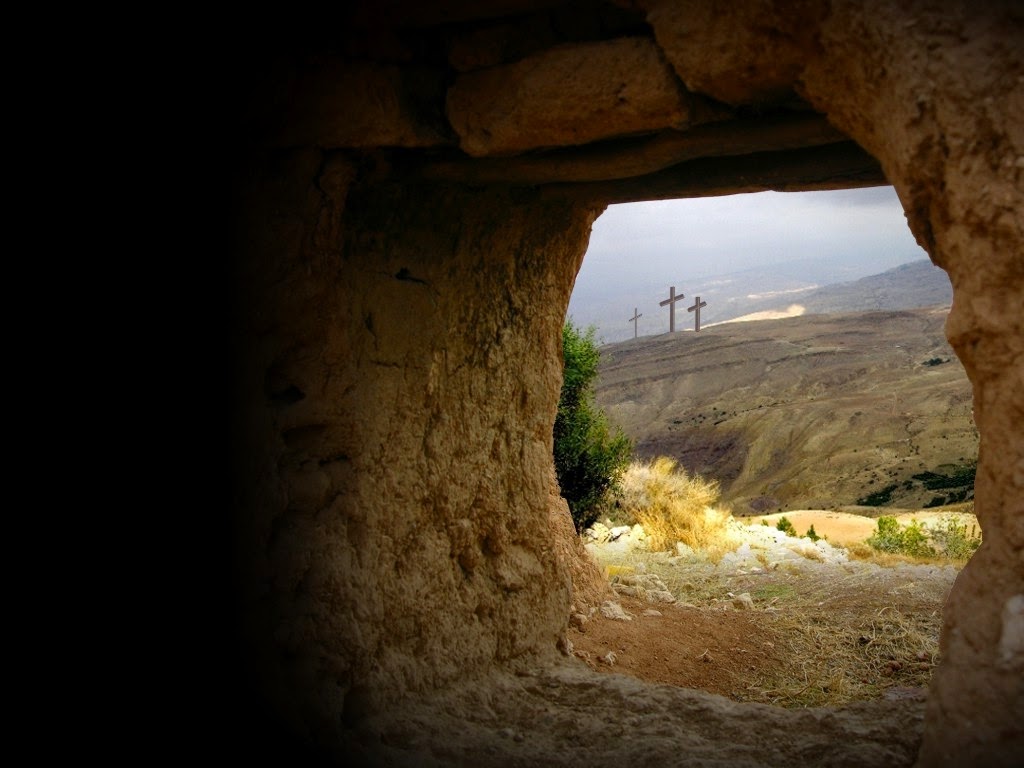 “Early on the first day of the week, while it was still dark, Mary Magdalene went to the tomb and saw that the stone had been removed from the entrance. 2 So she came running to Simon Peter and the other disciple, the one Jesus loved, and said, “They have taken the Lord out of the tomb, and we don’t know where they have put him!”
3 So Peter and the other disciple started for the tomb. 4 Both were running, but the other disciple outran Peter and reached the tomb first. 5 He bent over and looked in at the strips of linen lying there but did not go in. 6 Then Simon Peter came along behind him and went straight into the tomb. He saw the strips of linen lying there, 7 as well as the cloth that had been wrapped around Jesus’ head. The cloth was still lying in its place, separate from the linen. 8 Finally the other disciple, who had reached the tomb first, also went inside. He saw and believed. 9 (They still did not understand from Scripture that Jesus had to rise from the dead.) 10 Then the disciples went back to where they were staying.” (John 20:1-10)
When the disciples and Mary Magdalene got to the tomb where Jesus was laid they could not find his body. The tomb was empty. They did not have a revelation from scripture concerning the death and resurrection of Jesus.
As God spoke through David about the messiah in Psalm 16:10:
“For you will not abandon my soul to Sheol, or let your holy one see corruption.”
No doubt the empty was enough sign that Jesus had resurrected. But the stone was not rolled away by man. Jesus did not escape when the tomb was rolled away. He did not require an open tomb for him to leave there. He could move out the tomb without being hindered by any physical limitation. We saw this when he manifested himself before his disciples in their hideout without knocking on the door.
Why was the stone rolled away?
I submit to you that the stone was not rolled away to let Jesus out but to let us in to see the victory of life over death. Jesus did not just resurrect he was born again. So there was to be no trace of his past. He died our death and died as the first Adam. Everything that he absolved on the cross was annihilated in his death and he rose leaving behind no elements as was consumed in his sacrificial offering when he declared “finished” on the cross.
The stone was rolled away to let us in to see that He was risen for our justification. The Old Adam is no longer available for us to behold. It was an invitation for us to behold his victory over corruption, sin and death. This victory was for us to revel in. it was a new beginning for creation in redemption.
It was to let the disciples know that hope was not lost in his death. But that death was the beginning of the hope they believed in.
This was shadow to substance manifestation of the ark of the covenant.
The tabernacle of Moses was a portable sanctuary used by the Israelites from the time of their wandering in the wilderness after the Exodus from Egypt to the building of the temple in Jerusalem (see Exodus 25–27). Within the tabernacle was the Ark of the covenant which included the mercy seat (Hebrews 9:3-5 NKJV).
The ark of the covenant contained the two stone tablets inscribed with the Ten Commandments, which was the most sacred object of the tabernacle and later in the temple in Jerusalem, where it was placed in an inner area called the Holy of Holies. Also within the ark were the golden pot of manna, such as was provided by God in the wilderness wanderings (Exodus 16:4) and Aaron’s almond rod (Numbers 17:1-13).
On top of the ark was a lid called the mercy seat on which rested the cloud or visible symbol of the divine presence. Here God was supposed to be seated, and from this place He was supposed to dispense mercy to man when the blood of the atonement was sprinkled there.
But most importantly notice that on the mercy seat you find two cherubs facing each other on both ends.
Now look at John 20:11
“Now Mary stood outside the tomb crying. As she wept, she bent over to look into the tomb 12 and saw two angels in white, seated where Jesus’ body had been, one at the head and the other at the foot.”
Do you know that Hebrew word for “Ark” is coffin. Now what do you put in a coffin. Anything Dead! Is it now interesting that God put the symbols of man’s rebellion in the ark (coffin) of the covenant. This mercy covers it and is sprinkled by blood.
What Mary saw was a live picture of the Ark of the Covenant. The difference being that all the symbols of our rebellion was crucified in Christ and none was left behind for us to pick up.
“having canceled out the certificate of debt consisting of decrees against us, which was hostile to us; and He has taken it out of the way, having nailed it to the cross.” (Colossians 2:14) NASB
The empty tomb is the proof that death cannot hold you captive because you rose with Him in power and glory to be seated at the right hand of the Father in heaven. All your past, sin and failures died away and now there is no evidence to hold your captive. Rejoice in the grace of God.